TWO DEHORNED RHINOS KILLED IN MATOPOS
Poachers killed two white dehorned rhinos in Matopos National Park last week. One of the two rhinos was dehorned in February 2008 while the other was dehorned in September 2013. Information at hand reveals that the poachers carried out their illegal activity at night.
Currently the country has just over 700 both black and white rhino and 11 rhinos have been poached in 2013.
Investigations are continuing. 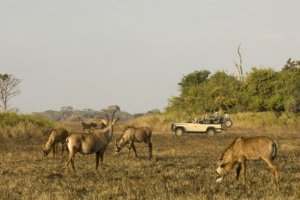