It was an early start for me that Wednesday. The alarm clock ensured I was up at 4am, finished packing, took a quick shower and got ready for my bus ride to Kariba. I knew it was a tourism industry-related trip and I wasn’t entirely sure who I would meet and travel with. What I knew for sure was that I would have an opportunity to see Kariba in a different light compared to my last trip in 2011.

Shortly before 6am, my wife dropped me off at our agreed meeting place in Avondale. I greeted and introduced myself to my fellow travellers as I boarded the Nyathi Travel bus and promptly sat down as we prepared for our departure. Once the last travellers were on the bus, we were on our way. The early part of drive was rather quiet. I’m sure some like me had woken up way too early for a Wednesday so a few caught up on some sleep for the first few hours, some chatted away while I read a book instead as we edged closer to Kariba.

We slowly made our way passing through Banket, Chinhoyi, Karoi and Makuti. We stopped briefly at Orange Grove Motel in Chinhoyi followed by Makuti Hotel. At Makuti we turned left and travelled along the 75 kilometre winding road towards Kariba. By approximately 1pm we had arrived in Kariba at Andora Harbour and

met other travellers who had been waiting for us to arrive.

Shortly after we arrived, I boarded Umbozha House Boat with most of the travelling crew on the bus and joined the others.  Once in Kariba, I finally understood the dynamics of the trip. There were media people, travel agents and other service providers including representatives from Bumi Hills Safari Lodge and Rhino Safari Camp. This trip would entail the use of 3 Dunhu Ramambo house boats – Umbozha, Karabezi and Liberty Bell.

The majority of us would board Umbozha while the various media groups occupied the other 2 house boats. The remainder would then be split up and spend alternating nights on Umbozha, Rhino Safari Camp, Changa Safari Camp and on our final night, the majority of the group would stay at Bumi Hills Safari Lodge. As we were getting ready to depart, I went exploring. I wanted to see what Umbozha was all about given that this was her maiden voyage after the refurbishment. I was thoroughly impressed with the detail, the bar area, the little extras, the quality and choice of the furniture and the actual spaciousness of the vessel. Once everyone was settled in, had the welcome drink and snacks, we departed at approximately 2pm and headed towards Palm Bay close to Changa Safari Camp. As we made our way, lunch was served while we mingled and got to know each other more.

After lunch I decided to explore the rest of Umbozha and the room where I would spend my first night. While all this was happening our trusted captain steered our ‘new home’ towards Palm Bay. Before we knew it we had arrived at approximately 4pm. It was that beautiful time of the day; the sun wasn’t as hot as it was 3 or 4 hours prior. We immediately spotted some elephants in the distance.  We found a spot to spend the night and subsequently docked all 3 house boats there. The group staying at Rhino Safari Camp immediately left Umbozha and we would see them again tomorrow afternoon. My group immediately disembarked Umbozha and headed to Changa Safari Camp by boat for a site inspection.

The sun was setting as we sat in the Changa boat and we headed towards Umbozha after our site inspection. All 3 house boats were docked close to each other. Once on board we spent the next hour or so deep in conversation with other guests before our first dinner of this trip was served. Following on from a really nice lunch earlier, dinner was even more special. I was in awe at the high of quality meals we ate on Umbozha throughout the entire trip. Credit to the hard-working chefs and their cooking skills for producing consistently great food throughout the entire trip

A fellow traveller, Mama Sylvia had a guitar and serenaded us with a song or two before we retired for the

evening. I had had a long day given the early start and the trip thus far. My comfortable bed welcomed me with open arms as I crashed and rested ahead of the following day’s activities. First thing the next morning, the guys at Changa would pick us up for an early morning game drive in the Matusadona National Park.
More on Changa to follow .. 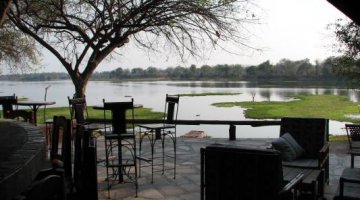