Staff at Tiger Safari Camp marvel at the vehicle

The Zapp family have just arrived in Harare, having travelled from Mana Pools in their vintage 1928 Graham Paige saloon car.  En route to Mana, they stopped at Tiger Safari Camp, much to the delight of the staff !

Here is an excerpt the Zapp’s latest Blog

“Here we are! We are traveling around these lands. AFRICA for us is a Strong Word, it is adventure, wildlife and beauty, and that is why we are here… to finally see it by our own eyes, to feel it with our own lives, and venture it with our own wheels.

We arrived in Zimbabwe, coming from South Africa, Namibia, Botswana and Zambia. The people over here is very friendly! We are having many invitations to their homes and we have visited a unique National Park named Mana Pools where you are allowed to walk and be very close to the animals. Can you imagine being only 15 mts from a group of lions eating a hippo? This way you experiences a great feeling. From here we will go to Mozambique and then Egypt.

We will be showing you the route very soon!

Thank you Zimbabwe for such a nice welcome!!”

Herman Zapp (42) was born in San Francisco, CA. and raised in Argentina.

They both believe that the secret to realize a dream is to start it.

Their message to one and all is simple. Live your dreams. If you don’t live it now…so… when? Be bold. “The most difficult moment was to begin, leaving everything behind: the family, the house, our work, and our friends, to go directly into the unknown, unpredictable, the strange…But from the time we opened the door of this car and sat down everything have changed in our lives.”

They both grew up in the countryside, amongst ponies and cousins. At eight and ten years of age they met, and the impossible love that they felt at that time grew and became a reality when she was only 14. For another 10 years, they dated and grew up together with a dream accompanying them. But after six years of marriage, they took their first steps pushed by their desire to have children. They said, “First let’s complete our dream, then we’ll have children” and it couldn’t have been a better way: their first son arrived together with the dream, one dream inside another.

Many call them crazy but “Who is the crazy one? The one who goes for his dream or the one who doesn’t?  When I risk my life for something I want the most, it is then that I feel most alive. I would rather die trying to live than to die without having lived… Everybody has a goal, to leave it aside is to leave life itself.”

The trip from Argentina to Alaska was a Big Dream with many challenges to go through. Going down the Amazon River in a raft, running out of money, having Visas denied and having their first son along the way were only a few of these. But when that trip was over, they realized that the best part of the journey was the People. They opened their hearts to them, and shared also their big treasure: their families, their homes. Since they left they have been hosted in more than 2000 family homes. Another mountain after a thousand mountains, is just another mountain. Another beach after a thousand beaches, is just another beach… but the person they meet is unique, the one that counts, and that is why their dream kept growing…

They travelled all around Argentina, where their second boy was born. Since then they have not stopped. The car was shipped to Florida and so began a new journey driving along a fresh route. They headed north to Montreal, then west to Vancouver Island, where their princess Paloma was born, and finally they went south to Los Angeles, CA.

They then went to Australia. As soon as they got there, their fourth baby arrived and, with him aboard, they covered a complete loop around the country. They’ve been in deserts where only kangaroos live, and where fuel is not available for a stretch of at least 500 kilometres. Then the car was shipped to New Zealand and they travelled through both the North and South Islands.

Having completed their piece of Oceania they headed for Asia and traveled 13 countries. They drove many times at more than 5.300 msn in Tibet, shipped the car in a wooden boat to go from country to country and Island to Island.

They are poised to drive through Africa, from south to all the way to Egypt.

They’ve already been 12 years on the road, and have had four children, all conceived and born in different countries while travelling.

Some may say they may not have the ideal car to circle the World, and some may say they don’t have the required funds needed, but when you read the book and the many extraordinary experiences they have had, you will likely come to believe that they have the perfect car, all the resources they need, and in addition they have something more important than anything else – the willingness to chase and accomplish their dream. 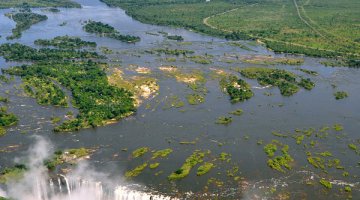