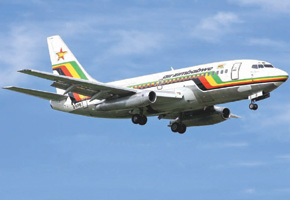 An Air Zimbabwe plane was forced to abort in mid-air a flight to Victoria Falls Sunday morning after one of its engines caught fire barely 20 minutes after take-off.

The Boeing 737 plane was flying to Victoria Falls when it was forced to make a U-turn and return to Harare International Airport.

Airline officials confirmed the incident adding none of the 30 passengers of the 100-plus-seater plane were injured.

“There was an air-turn back on the Harare-Victoria Falls flight this (Sunday) morning after the captain detected a technical fault,” said Air Zimbabwe spokesperson, Shingai Dhliwayo.

“The air-turn back was one of the safety decisions that had to be made. When given warning signs, you have to respond and that is why we made a safety decision as one of our culture elements.”

The passengers, who had boarded the plane at about 8am were delayed at the airport for about seven hours and only managed to leave after 3:30pm on a replacement Embraer ERJ 145 Jet.

Next post AAT up the ante with key investments