A Diamond Day on Safari 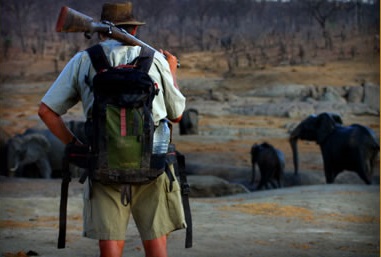 Any day you get to walk in Africa is for me, a good day, but there are some days that are just extra special. Last week, guiding a group of 6 guests on a walking safari I had one of those diamond days .

The previous day had… been a long, hot, hard walking slog. We had found the tracks of a male rhino and even though it was around 12 hours old I had decided to follow it as these days rhino are few and far between and any track is a good track. Tracking rhino is a lot like climbing mountains – you have to know when to pull the plug and turn around and go home no matter how close you are to your goal. After 15 kms of very good tracking by Obert, my tracker, I made the decision to call it off. October heat, lack of water and the increasing distance from our pick up point made my decision easier even though I was positive we were only a few kms from our quarry.

The next day we set off to continue the search as I was sure I knew where the rhino was heading to. On the way we bumped a pride of lions consisting of two males, five females and a juvenile. Continuing on , as luck would have it, we crossed very fresh spoor of a female rhino and her calf. I had first found their tracks in March and had tracked her several times without success. The wind was in our favor but she had the habit of turning down wind when looking for a lie up position for the hot part of the day which probably explains her survival in the current rhino poaching onslaught . I knew I had to catch her in the next two hours before it heated up so we wasted no time following her. On the way we were lucky enough to come across a family of bat eared foxes at what I suspect is a breeding den as October is their pupping season . But there was no time to waste checking it out. After 5 km the rhino tracks turned down wind and if the previous tracking episodes were anything to go on they were looking for a lie up position. Sure enough we found where they had laid down for the first time. A few hundred meters further on we temporarily lost track in a grassy area and were casting around for spoor when a small plane flew over us. There was whistle from one of the guests and following his pointing finger there was the mother and calf only 40 meters from us. No doubt they had been disturbed by the plane and stood up . They stood for a while then trotted off a hundred meters followed by us , they stopped again and then caught our wind and took off . After so many months searching for them we were elated to have finally caught up with them

After returning to camp for lunch and a siesta we checked out the waterholes in the river bed below camp and were a bit disappointed to discover that a large pack of wild dog had come to drink that morning and we had missed them. We set off for Shumba pan seeing hundreds of elephant and buffalo on the way. Someone briefly mused on finding a leopard to complete the Big Five but I was not over confident as they are notoriously elusive and I felt like we had used up our luck. Then, just beyond Shumba Pan , we came around a corner and there in front of us was a very relaxed leopard cub lounging in the shade of a tree into which her mother was hastily disappearing. We watched the cub for 20 minutes until another vehicle approached and it took off. We were then given a salutary lesson on how good a leopards camouflage is as 10 pairs of eyes searched the tree for the female for 10 minutes before she was spotted. The was much contentment around the camp fire that evening and after a hyena noisy night we were having an early breakfast when much to our delight 22 wild dogs decided to use our camp as a hunting ground before circling around to drink at the watering holes 20 meters below us .

All in 24 hours . I really don’t know what I’m going to do when I stop wondering around the bush and get a proper job 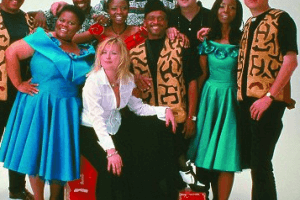