Fishing on the Zambezi becomes a mind game 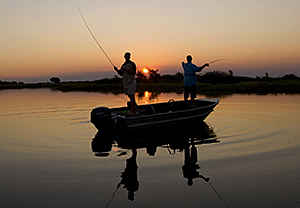 Fishing on the Zambezi River as the sun goes down

Every year my colleagues and I always look forward to participating in at least one tiger fishing tournament. Tiger fishing is the ultimate fishing tournament for any discerning fishermen in Zimbabwe. While the accomplished fishermen battle it out in Kariba, my colleagues also run a similar (though less glamorous) competition on the Zambezi River.

This year, 20 competitors took part in the Zambezi River tournament.

In line with our tradition, we spent the first day of our tournament fishing palm size breams which we use as bait for tiger for the following three days.

It was not a difficult task to catch the breams.

We all enjoyed our first day’s catch, which we thought was going to boost our chances of catching good quality tiger fish in the following three days.

The following day, one of our colleagues Charles refused to go along with us to the main event of the day.

He said that all he had wanted was to fish along the Zambezi and he was satisfied with his catch of breams, so much that he did not want to participate in the tournament anymore.

The captain of Charles’ team, Henry complained bitterly about the latter’s decision to withdraw, especially after the team had made the long journey from Harare.

However, Charles stuck to his decision saying that he feels he has a realistic chance of increasing his catch of breams than attempting to catch tiger fish which was elusive and very difficult to do. 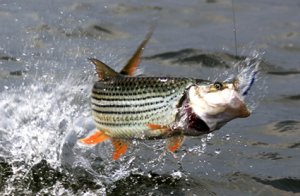 Tiger fish jumping out of the water

“Well I have made up my mind and I am sticking to my decision. Realistically speaking, I do not think I can catch a big tiger so I would rather catch lots of breams than to be miserable for the next three days,” Charles said.

We all realised that Charles was serious about continuing fishing breams and it was a mammoth task to try and convince him to change his mind.

Henry and his teammates had to do without Charles and competed with one man short. We set out for camp G and our competitors went to Sapi area in the Zambezi River.

The winner of the first day caught a 5,8kg tiger fish. This did not in any way encourage Charles to try tiger fishing the following day.

He was very content with catching bream and it appeared he had completely switched his mind off tiger fishing. The second day’s winner caught 6kg tiger and the ultimate winner of the tournament caught 9kgs on the third and final day of the competition.

Though Charles participated in the price giving ceremony he did not share in the frustrations of the losers or the triumph of the victors during the three day event.

His story line was that the breams were biting well and he had filled a bucket with breams.

Charles appeared to have been competing in a separate river though we all shared the Zambezi River.

He spent four days fishing at only two of the spots we fished on our first day. Though the river is very big, he was contented to fish at the two spots which were fifty metres apart.

On the hand we were fishing at spots that were as far as 30kms up and downstream away from Tiger Safaris where we were camping. 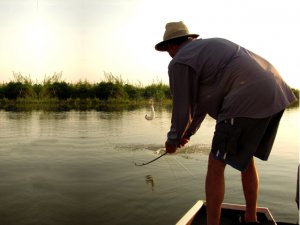 Henry and his team mates reel in Tiger fish

Charles’ behaviour demonstrates that the threshold of satisfaction of individuals differs from one individual to another, though the individuals may be in similar working environments.

We created for ourselves a fishing zone stretching 60km and Charles fishing zone was only 50 metres in the same river we were fishing. While some of us were worried about a trophy catch, Charles was preoccupied with catching several palm size breams.

Our minds can expand or decrease the size of the world around us just like Charles’ mind convinced him that he is not able to compete in the competition.

Looking at Charles closely, I observed that there was nothing physically wrong with him, except that his mind had convinced him that he was not able to compete for a trophy size tiger fish.

The moment our minds conceive anything as real, it either blocks anything that does not agree with that new realism or only activates the body to deliver anything that is in alignment with the “new truth.”

Our body is not able to deliver anything that is beyond our personal convictions.

Our minds reject an activity or opportunity which is beyond what our mind tells you that you can.

However the needs are only attainable, if an individual defines and accepts these needs as necessities for their sustenance.

The moment Charles convinced himself that a tiger trophy was not necessary, his mind sent signals to his entire body, that competing in the tiger competition was not important. In Charles’ world catching several palm-size breams was all that was important to him, never mind what others were catching.

Once our minds block our aspirations, we begin to justify our reasons for performing below par. In a similar way Charles justified his behaviour by the number of palm-size breams he was catching.

Tiger fishing on the Zambezi River

Most of the times, we settle for mediocrity by just telling ourselves that we don’t need it, so there is no need to stretch ourselves for nothing.

Once that happens our adrenalin is suppressed. We convince ourselves to settle for the second best and slowly we derive comfort in this second best atmosphere.

Though Charles enjoyed eating tiger, he did not think it was necessary for him to catch one himself. We do not have what we need because we do not think it is necessary to have them.

We vent out our frustrations by blaming others, instead of blaming our minds which restricts our world of possibilities every time opportunities arise.

Extra ordinary performance does not come by just doing what you can achieve in the ordinary course of business. It comes from stretching yourself to strive to go beyond what you know you can achieve.

Prizes are given to people who are willing to undergo the pain of stretching themselves.

In Julius Caesar, William Shakespeare writes “our faults dear Brutus lie not in our stars but in ourselves that we are underlings.” 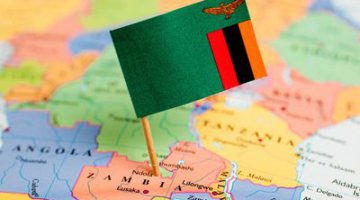