Sikongo Haihambo, MCA-N Deputy CEO of Operations and Larry Laursen signing the agreement between MCA-N and the Namibian Academy for Tourism and Hospitality for the training of tour guides.

MCA Namibia (MCA-N) has signed a grant agreement with the Namibian Academy for Tourism and Hospitality (NATH) to train 20 tour guides of the National Heritage Council (NHC) to obtain their Level 3 National Guide qualification. The agreement adds to a similar agreement in April 2013, which provided for the training of 20 tour guides and will essentially increase the number of trained tour guides to 40 people.

NHC director Reverend Salomon April called MCA-N a “true friend” and thanked the U.S. Government funded organisation for “its continued support in elevating tour guides’ skills and knowledge in this crucial field, bearing in mind that many of them come from a poor background.”

Larry Laursen from NATH stressed the importance of timing, as Namibia will soon be hosting the 2013 Adventure Travel World Summit that would see more than 600 international tour operators travelling through Namibia.

“Our tour guides will not only inform them about animals and plants but also tell them stories of our rich Namibian cultures and traditions, because there is no national heritage without cultural heritage,” said Laursen. 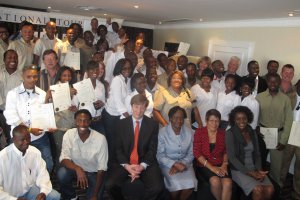 The training programme runs over 61 days, after which the participants will be assessed by the Namibia Training Authority before receiving certificates. MCA-N will fund 60 percent of the training costs, valued at N$1.8 million, while the NHC would cover the other 40 percent of the costs.

The tour guides will mainly work in the northern heritage sites at Twyfelfontein, Brandberg and the Petrified Forest.

MCA-N is implementing development activities in the country’s education, agriculture and tourism sectors financed by the United States Government through the Millennium Challenge Corporation’s

US$304.5 million (N$ 3 billion) grant that aims at reducing poverty through economic growth.