Batoka Dam to benefit both sides of the Zambezi 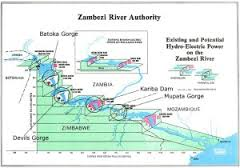 Zambezi River map showing where the Batoka Dam will be built

Zambia and Zimbabwe have several existing power stations on the Zambezi River which are shared by the two countries.

The hydro-electric schemes on the Zambezi River are Victoria Falls with a capacity of 108 Megawatts (MW), Kariba North Bank with 1,490 MW and Zimbabwe’s Cabora Bassa with 2,000 MW capacity.

Zambezi River Authority (ZRA) is a corporate body jointly owned by the Republics of Zambia and Zimbabwe through bilateral agreements to co-manage the shared stretch of the Zambezi River.

In this regard, ZRA has since 1987 been managing the Lake Kariba and its attendant infrastructure to facilitate and support hydro-power generation in the two countries through their respective power utility companies namely Zesco and Zimbabwe Power Company (ZPC).

Over the past years, the demand for electricity supply has gone up in Zambia and Zimbabwe because of increased economic activities in the two countries.

This is why the ZRA has in the past commissioned several studies to establish the potential of the Zambezi River for further hydro electric power development to mitigate the power deficit.

One such study was undertaken in 1972 by Merz Mclellan and Sir Alexander Gibb and Partners.

This study culminated into a report that identified several dam sites with potential for development as hydroelectric schemes along Zambezi River for Zambia and Zimbabwe.

Of the several hydro electric schemes identified and investigated on the Zambezi River, the Batoka Gorge Scheme located on the downstream of Victoria Falls along Zambezi River has the greatest progress in terms of technical investigations, feasibility studies and financial viability.

The Power System Studies undertaken by the Batoka Joint Venture Consultants (BJVC) in 1993 established the Batoka Gorge as the most economically viable option for immediate development.

This is primarily because the site has the lowest specific generation cost and minimal negative environmental impacts.

The studies showed that Batoka, when compared to Kariba and Kariba Gorge Power stations, would increase efficient utilisation of waters of the Zambezi and Kafue Rivers.

Further still, conjunctive use of the Batoka with Kariba justifies extension of Kariba South and North power stations for firm capacity.

Another consideration in Batoka’s favour is its proximity to major health facilities and communications in Livingstone, Victoria Falls and Hwange.

In February 2012, the Governments of Zambia and Zimbabwe agreed to expand the hydropower infrastructure on the Zambezi River and in so doing approved the construction of the Batoka Dam upstream of Lake Kariba.

Batoka Gorge hydroelectric power stations would be located about 54 kilometres downstream from Victoria Falls extending across the international boundary of Zambia and Zimbabwe.

Negatives of building a dam

There will be an 800 MW power plant on the Zambian side and another 800 MW on the Zimbabwean side at Batoka Gorge.

Once completed, as with the Kariba dam arrangement, the Batoka Gorge power scheme will also be co-managed by the two countries through the ZRA.

ZRA public relations and communications manager Elizabeth Karonga said the construction a dam to facilitate the setting up of Batoka Gorge hydroelectric power stations was expected to start next year after the new Environment Impact Assessment (EIA) and social impact assessments are concluded.

Ms Karonga said the desire of the two countries was to put up a dam and kick-start the power projects by September next year after the new EIA and social impacts were concluded.

She was speaking in an interview last week during a media tour of the Batoka Gorge site on the Zimbabwean and Zambian sites.

“Previous EIAs were done in 1993 but these studies have been updated and we are still evaluating the new bidders.

Preliminary assessments have been done to facilitate the actual construction of a dam for Batoka George power stations,” she said.

So far, the access road to Batoka Gorge on the Zimbabwean side has been completed while the road on the Zambian side is still being worked on.

On the Zimbabwean side, there was an existing road which they were using to access a camp site in 1993.

Ms Karonga was happy to note that there would be no need for resettling people like the case was during the construction of Kariba Dam.

“All the previous EIAs done so far are favourable as there will be very little disturbances to surrounding communities,” she said.

ZRA hydrology technician Samuel Mwale said the Batoka Dam would be about 181 metres high which is higher than Kariba Dam although it would be smaller in size compared to Kariba.

Mr Mwale said the 1600 MW of power to be generated would alleviate the power shortages being experienced in Zambia and Zimbabwe.

“Unlike Kariba Dam, Batoka Gorge is sparsely populated and there will be no displacement of people as all water will be confined in the gorge,” she said.

On benefits to surrounding community, Mr Mwale said the access roads would improve transportation in the area while nearby schools would be supported.

Mr Mwale also noted that tourists currently engaged in white water raffling would no longer do the activity as the Gorge would disappear after the dam is constructed.

He however said there would be new forms of tourism as people would put lodges along the shores of the lake.

Mr Mwale also said the contractor working on the access road to Batoka Gorge on the Zambian side was expected to do graveling and shaping of the road before the onset of the rain season so that it could reach the Gorge.

A headmaster, whose school is located on the access road to Batoka Gorge on the Zimbabwean side, Fanny Moyo said the planned construction of the power stations would greatly benefit the community. 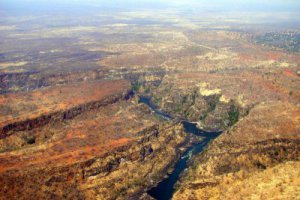 Mr Moyo said contractors working on the access roads have so-far painted his school and dug a borehole since it was near the project.

He also said the access road constructed from Victoria Falls town to Batoka Gorge would also benefit the pupils and other users such as farmers.

On the Zambian side, the affected Chibule village headman in Senior Chief Mukuni area Siasiya Chalinga said his people were yet to see the benefits of living near the Batoka Gorge power station.

Headman Chalinga, whose village has 275 people, said the construction of the access road to Batoka Gorge led to the destruction of maize fields in March this year and that the farmers had not yet been compensated.

Andrew Chalinga, a son to headman Chalinga said an agricultural officer told the residents that they were going to be compensated since their maize fields would be destroyed during the construction of the access roads to Batoka Gorge.

Mr Chalinga said residents were not told on how much money they were going to be compensated for their maize fields.

“People here are still waiting patiently especially that they need to pay other people to go and clear new fields.

When contractors were clearing the fields in March this year, some areas had maize and groundnuts so we need to be compensated,” Mr Chalinga said. 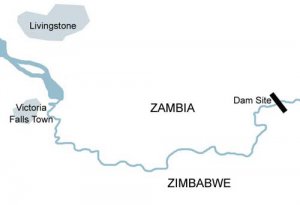 He said one hectare of land may cost about K500 and negotiations for compensations could be based from that costing.

“Our fields which have been destroyed were used to feed our families and we want to be compensated before rain season,” Mr Chalinga.

In response, Ms Karonga said field officers were supposed to have compensated all those villagers whose fields were affected during the construction of the access road to Batoka Gorge.

She said she would follow up the matter with officers responsible so that villagers could be compensated as planned.

The Batoka Power stations would go a long way in providing additional source of power to meet electricity demand for industries in Zambia and Zimbabwe.

Ultimately, the increased power capacity would stir economic activities in the two countries. 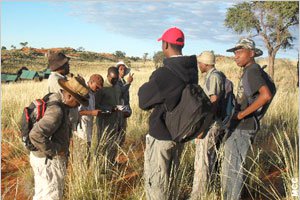