Hotelier African Sun (ASL) is poised for expansion as the group has unlocked value through international partnerships with African Development Cooperation (ADC), a Germany-listed financial services group with special interest in the emerging markets of sub-Saharan Africa.

A company spokesperson said this week the partnership meant African Sun now had strong partners to mobilise resources for local and regional development.

“As stated at the half-year briefing, African Sun is looking to unlock their local pipeline with Zimbabwe as the primary development site. There are five potential developments in Harare, Bulawayo and Victoria Falls which will see the group increasing the room nights in the country and strengthening their stronghold as the largest hospitality group in Zimbabwe,” the spokesperson said.

Among other expansion plans, ASL intends to continue growing the number of rooms it runs in West Africa with its re- entry into the lucrative Ghana market imminent while new management contracts in Nigeria are envisaged.

The partnership was part of a shareholder restructuring the group announced this week which among other things saw African Sun chief executive officer Shingi Munyeza, through his family trust, Nhaka Trust, become a shareholder in private equity firm Brainworks Capital.

Munyeza’s family trust now owns 17,2% of the private equity company, while in return Brainworks holds a 32% shareholding in African Sun.

The company also benefitted from wide exposure as its Elephant Hills Resort was the hosting hotel while the Victoria Falls Hotel hosted the assembly’s opening ceremony.

Apart from the exposure and publicity received courtesy of the UNWTO meeting, the Victoria Falls area had also benefited through international exposure which African Sun expected would see incentive and conference bookings treble in the foreseeable future.

The Zimbabwe Tourism Authority has followed up by setting up a Meetings Incentives Conventions and Exhibitions (Mice) division which will work with the industry in ensuring the Victoria Falls is positioned as a preferred Mice destination.

Previous post Batoka Dam to benefit both sides of the Zambezi 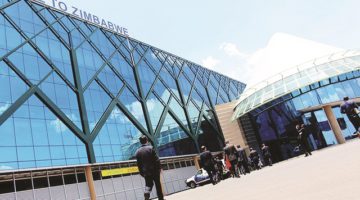