Okavango Delta from the air

UNESCO culture specialist Damir Dijakovic said that the nomination process normally takes two years and that the Okavango Delta’s application is on course.

A team of experts from the International Union for Conservation and Nature (IUCN) are scheduled to visit Botswana next month as part of an assessment exercise towards the proposed nomination of the Okavango Delta for being declared a World Heritage Site. This came to light at a media seminar on the World Heritage Convention and nomination of the Okavango Delta held in Maun. The experts will arrive in Botswana on
October 13.

Dijakovic noted that one of the key considerations for listing includes integrity which addresses issues relating to protection, clear identification of boundaries, management of the site, community involvement and potential threats to the site. He cited an example of the recently-listed World Heritage Namib Sand Sea site in Namibia, which has ensured that the communities already living there with their livestock continue to have access to land rights and resources.

Kgosi Oleyo Ledimo, who welcomed the participants, reminded them that the residents of Ngamiland must be given credit for preserving the pristine delta on behalf of Batswana. “We have worked hard to conserve the delta and we have been co-operative with relevant departments to ensure that the listing comes into reality,” he said, adding that the delta is vital to the local economy as the communities make a living through fishing and other natural resources. 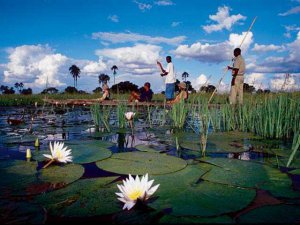 Canoeing through the Okavango Delta

The seminar heard though that some development activities are incompatible with the listing of a site and this includes uncontrolled and unmonitored tourism ventures leading to overcrowding as well as mining within the site’s core and buffer zones. In regard to tourism development, the Botswana nomination dossier proposes a maximum of 1 300 or 700 beds in the core area, and a maximum 24 beds per lodge. Clearly for mining development, the listing effectively does away with any prospecting or mining activities in the entire listed site.

During her presentation, the principal curator in the Department of National Museums and Monuments (DNMM), Gertrude Matswiri, noted that the overall objective is that there will be “no prospecting and/or mining licences issued within the delta and panhandle. No new prospecting and/or mining licences are issued within a buffer of 15kms of the delta and panhandle.”

Existing licences that are a concern from a conservation perspective will have to be withdrawn by the government as soon as they are relinquished by the current licence holder, she added. Meanwhile, Botswana’s only World Heritage Site, Tsodilo Hills is reportedly making positive developmental strides, registering close to 20 000 visitors annually, particularly after a generous injection of a much-needed P10 million funding from the Debswana-run Diamond Trust. 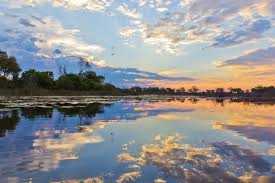 The Tsodilo Community Initiative has come as God send for this community of 200, which does not qualify for government infrastructural development as a village. The initiative is now able to generate income through entrance fees, craft shop and a camping site. two boreholes have been drilled for the community – complete with water reticulation for the village and many of the residents are working on the project. Matsweri disclosed that there were plans to build two lodges near the site, and to drill an additional borehole for watering residents’ livestock.