Hwange Game Count 2013: The night before

Buffalo at the Waterhole during the Hwange Game Count 2013

The annual game count has come and gone with once again the old trusted stalwarts on duty.

Everyone assembled at main camp the night before, and after a very hot and dusty day, temperatures hovering around the 35 degree mark, there was nothing that these old war horses were scared of!

Around 5pm all started appearing around the restaurant, deck chairs in one hand and cooler boxes in the other.

Approximately 100 people all gathered around, greeted each other with much excitement and vigour, not unlike elephant herds greeting each other after the wet season!

With the pleasantries over, safety talks were given to new comers by the ever enthusiastic Larranie King.

This was then followed by an introduction and welcome speech by the warden Mr. Dura, welcoming all counters to the park. His short speech included the sobering news on the recent cyanide poisoning in the South of the park. Something which is extremely worrying, so much so, that a delegation of Ministers were to be expected in main camp on the 21st September.

This was followed by scheduled talks by numerous researchers and book authors in the area. To mention a few, Brent Staplekamp from lion research, Peter Blinson from the Painted dog centre, Sharon Pincott who is a book author.

The slide show was slightly delayed due to the lack of a Projector! This was swiftly rectified by the cirad research team.

The talks were followed very intensely by all of the audience and seemed to go down extremely well.

Post talk joviality returned with full gusto and slowly but surely the party quietened down with all anticipating the long 24 hours ahead.

They were all pleased to hear of no incidents and a lot reporting some great sightings. Most pans had water but it definitely looks like a tougher year than last in terms of water.

Let’s hope rains don’t wait too long and when they come they deliver in abundance. We will also be posting the final results of the Hwange game count, so keep checking for updates.

Elephant at the Waterhole during the Hwange Game Count 2013 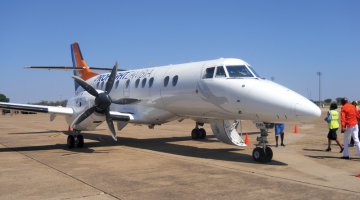