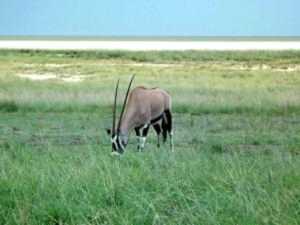 A safari guide once taught me that if you can’t see the wood for the trees, try scanning each branch for lumps and bumps – you never know what they might turn out to be. It’s a trick that’s found me bushbabies, roosting owls and tightly coiled snakes. But this is the first time it’s delivered an antelope.

From a distance, the impala in the acacia appears to be standing up, high in the branches, like a Moroccan tree-climbing goat. “Did it jump up there? Is that normal?” asks one of my companions. Earlier, Manfred, our guide, told us a pronking impala can leap three times its own height; up to three metres, if it’s really agitated. So it’s not too outlandish a question. But our binoculars reveal the answer. Just visible at the foot of the acacia is the leopard which killed the hapless impala and hauled it off the ground. It shows its face for a heartbeat, then melts into the undergrowth with a flick of its tail.

We’re in Etosha, a superb national park which, in the space of a few hours, delivers thrill after thrill. At one mirror-smooth waterhole, battle-scarred giraffes splay their legs to drink while a pair of jackals court and couple on the opposite bank. At another, a herd of elephants and their thigh-high young socialise in the cool of the afternoon, seeing off a robust young male who presumably looks like trouble.

In centuries past, the San people used to roam this sun-bleached wilderness, living among the wildlife and doing their best to outwit them. In a prehistoric precursor to Twitter and Facebook, they exchanged information at rock art sites such as Twyfelfontein and Brandberg via trance-induced paintings and engravings depicting shamans, hunters, prey, waterholes and migration routes. The dusty but dignified National Museum of Namibia in Windhoek devotes a sizeable exhibition to these remarkable petroglyphs.

After Etosha was declared a game reserve in 1907, many San clung on. But within 50 years, all had been driven out. By the 1960s, the apartheid government parcelled them off to an arid block of Kalahari scrub they called Bushmanland, in what is now the Otjozondjupa region of northeast Namibia. 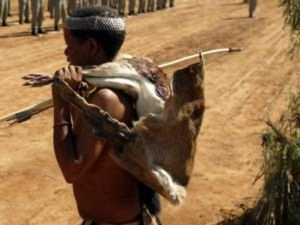 There are now believed to number fewer than 85 000 in Kalahari desert areas of Botswana, Namibia, South Africa and Angola.

Today, the San have mostly abandoned their hunter-gatherer lifestyle for a more settled existence, but their connection with Etosha’s mighty animals lives on. Contemporary San artists pay tribute to the imagery of their ancestors, representing their world in exuberant colour. Though vibrant and appealing, their work has, until now, had a low profile. “Colours of the Kalahari”, the Mall Galleries’ forthcoming exhibition of wildlife paintings by leading San artists from Namibia and Botswana, will be the first of its kind to be held in Britain.

Even in Africa, public platforms for San art are rare. When, earlier this year, the National Art Gallery of Namibia invited San artists to participate in a major exhibition called “Land Matters In Art”, it broke new ground. The “Land Matters” catalogue features vivid bead-paintings and linocuts of animals which inhabit the San’s consciousness – ostriches, lions and porcupines.

To my outsider’s eye, they’re dreamy and joyful. But the artists’ feelings, expressed in quotes beside each image, are prosaic. Frustration is a common thread. Many speak of their anger that hunting is now so restricted that killing for the pot can land them in jail. This seems to cut deep – as deep, perhaps, as the hurt of being hounded out of their ancestral lands, to be left to drift in the inhospitable Kalahari.

Disenchantment with conservation laws crops up in many guises, in many parts of Africa. Traditional rural societies which have no custodianship over the wildlife on their patch regard animals with ambivalence and hostility. They’re fearful of anything with heavy feet and fangs. They’re also resentful that they’re not legally permitted to hunt the species which made up their ancestors’ diet. This puts them directly at odds not only with law enforcers, but also with tourists – particularly those raised on documentaries which glorify wild animals while ignoring the challenges they present.

Namibia’s pioneering conservancy system seeks to solve matters by transferring responsibility for habitats and wildlife from government agencies to local communities. Each conservancy creates a committee to decide how best to preserve their surroundings while deriving income from farms, forests and tourism.

To find out whether the San are benefiting from the system, I travel east from Etosha to Nyae Nyae Conservancy in Otjozondjupa, hard against the Botswanan border. Most of its 2 300 residents are Ju/’hoansi, a sub-group of the San. (The / symbol signifies one type of the clicks that characterises Bushman languages.) With only 2.5 people per square km, much of Namibia feels empty. But few parts of the map look as blank as Otjozondjupa. The road to Tsumkwe, Nyae Nyae’s hub, is a bone-white ribbon of gravel that slices through 220km of arid bush, with barely a turn-off to distract you. There’s not much to Tsumkwe either, apart from a tidy school, a one-room bar and a rustic lodge. Every so often, a cloud of dust heralds the arrival of another posse of overlanders travelling between Etosha and northern Botswana. They’re the type who wear T-shirts saying “Africa: it’s not for sissies” and drink cold Windhoek lager in thirsty gulps.

In post-independence Namibia, people are no longer confined to specific territories; it’s just the wildlife which occasionally gets shunted around. I get chatting to three white Namibians who have travelled to Tsumkwe to witness the capture of a herd of elephants which is being moved to a private reserve, many miles away.

I explain I’m here because I’m interested in San culture. One of the trio raises an eyebrow and recites an opinion I’ve heard before. “Some say there’s not much left,” he says. “The South Africans tried to militarise them, others tried to Europeanise them. It’s resulted in all kinds of trouble, drinking, dependency, the lot.”

Under-education has also created problems. According to the UN, fewer than seven per cent of San children attend secondary school. Illiteracy makes the San vulnerable to exploitation. Non-San companies have discovered the San have a mystique that sells: San-style petroglyphs and the word “Bushman” appear on everything from wine bottles to tour buses.

Ju/’hoansi tribe around their huts

However, with measures in place to improve educational opportunities for marginalised communities, it’s hoped that the San’s prospects will improve. In Tsumkwe, two community tourism projects are empowering them to monetise their culture. The first is G!hunku Crafts, a fair-trade centre built with assistance from Raleigh International. Here, Ju/’hoansi women create and sell ostrich-eggshell jewellery. The second is even more interesting. Several groups of Ju/’hoansi offer the chance to join them in the bush for a few hours, to see the Kalahari through their eyes and learn a little bushlore.

At the meeting place – a semi-circle of grass huts in a sandy clearing – there are no Ju/’hoansi to be seen. Tsamkgao, our interpreter, makes a hasty call on his mobile, then confirms they’re on their way. Far from jarring, this seems a fitting prelude to what we hope will be an honest encounter. We’re not here to pretend that the San are lost in a time before mobiles were invented. We’re here to meet a contemporary community that happens to be blessed with some timeless knowledge.

Sure enough, our hosts arrive – an extended family group led by an authoritative-looking elder, Kaece, and his wife. They’re all dressed for the occasion in skins and beads. I attempt a greeting, “Xaio”, convinced the click will come out wrong. They beam.

Quickly, they arrange themselves in front of the huts like models in a museum diorama – a young man with his wife and children here, a gaggle of women and babies there. They look fabulous and we’re encouraged to take pictures. But we pause. If we’d seen these individuals in Tsumkwe in their off-duty T-shirts and jeans, we’d have passed without a second thought.

My mind flips back to the National Museum of Namibia, where my eyes had lingered on a photo of a Bushman with his head smothered in clay. Ethnographers used to subject the San to intrusive examinations, making casts of their facial features and measuring every nook of their bodies. Are we, with our zoom lenses, any better?

Our doubts soon dissolve. Our hosts are dignified, welcoming and utterly self-assured. Kaece asserts himself as our guide. Before we know it, he’s leading us into the bush. What follows is a masterclass in observation and ingenuity. To us, each shrub looks much like the next; to the Ju/’hoansi, some provide fruit, others medicinal leaves or water-rich tubers. One harbours neurotoxic grubs, used by hunters to tip their arrows.

I’m highly impressed by their fire-lighting skills – it really is as easy as rubbing two sticks together – and by the yellow-blue bush, whose roots when burned make a powerful lion repellent. The Kalahari currant seems pretty useful too. Crush its leaves and you have a stimulant so powerful it helps you find your way if you’re lost.

“We call it the San GPS,” says Tsamkgao. And with that, the Ju/’hoansi scoop up the gifts we brought and head off back to their village.

Watching their ease in the wilderness and their natural camaraderie, it’s all too tempting to romanticise the San’s stripped-down existence. We wouldn’t be the first. Even the flyer for “Colours of the Kalahari”, which aims to raise funds for community development, comes dangerously close. “With no formal art lessons,” it whispers, “they create stunning depictions of their environment, purely from the heart.”

If these artists had access to a better education, would their magical connection with nature have been lost?

It’s a risk which the next generation of San will, I’m sure, be willing to take. But I suspect they won’t let the old lore fade away quite yet. 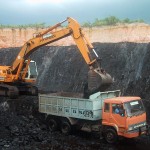 Commotion over issuance of mining licenses in sanctuary