We at Imire are very proud and pleased to announce that KamuChaCha, our oldest female southern black rhino is pregnant! And not just pregnant but VERY pregnant, with her baby due in early 2014! As you can imagine this has created HUGE excitement throughout the game park and we are all walking around with big smiles on our faces!

A blood test done in early August when the black rhino were dehorned, showed hormone levels indicating that she was between six and 12 months pregnant. Based on the last time she came into oestrus and the dates of the mating which we have observed this year, Game Park Manager, Reilly Travers, believes she is more towards 12 months than six and we think that there will be a little baby black rhino running around Imire sometime between January and April 2014.

“We are absolutely over the moon about KamuChaCha’s pregnancy and we are cautiously optimistic about her pregnancy, as well as being very excited,” says Travers, 27, who was born and raised on Imire.

KamuChaCha, who is now nine years old, will be pregnant for a lengthy 15 months before giving birth to a hefty-sized rhino calf, which commonly weigh between 50-80lb  at birth (25-35kg) – an eye-watering thought for all mothers out there (although light compared to 75kg for a giraffe baby). Rhino calves are all born without horns. The baby is also a first for the father, Gomo. 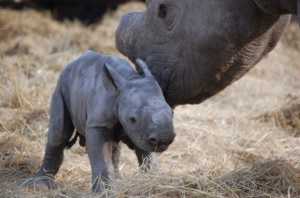 2007: Baby Tatenda, just a few hours old with his mother, Amber, who was tragically killed a few weeks later by poachers.

We will monitor KamuChaCha carefully over the next few months and when her baby is born it will stay close to her for the first year while she feeds it herself. When it is around one year old, if all goes well, the baby will then be weaned so that KamuChaCha goes back into oestrus, ready to have another baby. Depending on the state of the poaching situation in Zimbabwe and the general health of the calf, if the baby is a boy, when he is about three years old, he will be relocated back into the wild, under careful management. If the baby is a girl then she will remain on Imire to increase our breeding herd of females.

Hunted almost to extinction in Zimbabwe during the 1980s, the black rhino is in dire need of conservation efforts worldwide, largely thanks to demand from Asian counties for their horns, believed to have curative properties. Destruction of their habitat has also caused a decline in the population with only around 350-450 believed to remain in Zimbabwe, mostly on private reserves.

“We are looking forward to introducing local and international visitors to Imire to a new rhino and giving them the enjoyment and excitement of watching a calf grow up. We also hope that it will help educate and motivate guests to understand the importance of taking action to protect the rhino in Africa,” said John Travers, the Managing Director and owner of Imire.

And if that wasn’t enough good news… 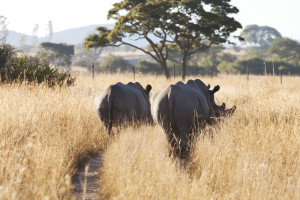 Ntombi and Matopos our two white rhino, about to have their first child!

In other and equally exciting news, we are almost positive that Ntombi, our female southern white rhino, is ALSO pregnant! We have not been able to do a hormone test yet, but we believe she may even be further along than KamuChaCha. White rhino have a gestation period of 16 months but we wouldn’t be surprised if her baby is born first. This will also be Ntombi’s first baby and, very excitingly, the first white rhino to be born on Imire. We will keep you informed!

Stay tuned for news on the progress of both pregnancies! 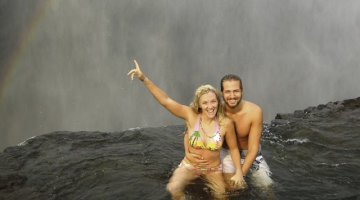 Victoria Falls: thrills but no spills at ‘the smoke that thunders’ in Zambia