Who said there are no tigers in Africa?

The continent may lack big cats with stripes, but its rivers, the Zambezi in particular, teem with tiger fish – stripy creatures with sharp teeth like piranha. 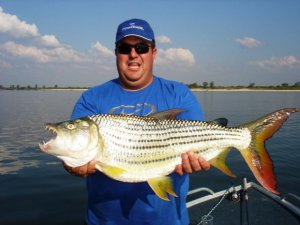 Landing a tiger, one of the great game fish, is an angler’s delight and people from far and wide descend on Lake Kariba each October for the Kariba international tiger fishing contest. Kariba is the jump-off point for canoe safaris on the Zambezi below the dam and an amazing tourist destination in itself, featuring fishing, houseboat holidays and superb game watching.

The giant man-made lake which divides Zambia and Zimbabwe is the biggest of its kind. It supplies the two countries with much of their electricity and water and is surrounded by some of southern Africa’s best game parks. Kariba is best on the Zimbabwe side but the safest approach is a four-hour drive from Lusaka, the booming Zambian capital. 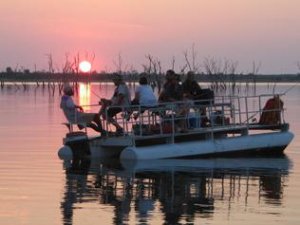 Fishing in the last moments of daylight on Lake Kariba.

The drive south is an adventure in itself. The bustling frontier city, full of building sites, cars and well-stocked shops, soon makes way for rural smallholdings and villages. The Chinese, a driving force of the development boom, are repaving the road that links Zambia to the rest of Africa.

Regular detours take you down dirt roads, past humble villages featuring goats, children and bins full of corn waiting to be ground by hand.

The dam appears suddenly, a massive 50-year-old structure that still inspires awe. We check out of Zambia – having spent a night in the lavish Taj Pamodzi hotel in Lusaka – at the relaxed border post and drive south to Zimbabwe.

Our first impression is of a country in a time warp. The TV features a daytime soapie and there’s a tense vibe as we apply for $30 visas under the watchful eye of a youthful Robert Mugabe, whose 1980s portrait dominates the shabby immigration office.

Our second impression, on arriving in Kariba town, is of a world-class water sport destination crying out for more attention from visitors.

The lake created by the dam is enormous, a 5180 sq km freshwater ocean stretching 240km west, almost to Victoria Falls. With the exception of giraffe and wildebeest, Kariba boasts an abundance of African wildlife – elephants, hippos, crocs, zebra and antelope.

The completion of the dam in 1959 sparked one of the great wildlife rescues. With thousands of animals under threat, game rangers Rupert Fothergill and Frank Junor launched Operation Noah, which relocated 5000 animals, including 50 black rhino.

The lake, up to 100m deep, is home to 54 fish species including nkupe, chessa, bottlenose, vundu and bream. The Australian freshwater yabbie is a pest.

At night Kariba twinkles as anglers haul in kapenta, a lucrative freshwater sardine introduced from Lake Tanganyika. But the species that most captures the imagination is the feisty tiger fish.

The three-day tiger tournament is held in October – known as suicide month – when temperatures reach 50C. The contest, in which fish as big as 16kg are landed (the biggest ones are female) is strictly catch and release. It attracts more than 1000 competitors who consume 1.5 tonnes of beer and spirits at a bar claimed to be the world’s biggest.

And talking of spirits . . . the one visitors should be wary of is Nyaminyami, the Zambezi river god. The BaTonga people, who sell wooden carvings of Nyaminyami to tourists, believe the dam enraged the philandering river god who remains trapped downstream, unable to return to his wife and home near the dam wall.

Our visit to Kariba, on the eve of entering the Zambezi wilderness Mana Pools, is made all the more enjoyable at Hornbill Lodge, a home away from home on Mica Point.

Tommy and Jackie Millar are generous hosts. Our thatched chalet, one of four, features a netted king bed and giltterstone floors. It is open to the night sky at the front and offers an unforgettable African sunrise over the Rift Valley escarpment and misty morning lake.

Jackie, raised in Alice Springs, breeds champion dorper sheep near Harare. Tommy divides his time between the farm and their retirement bolthole on the lake.

Our al fresco dining companions include Debbie and Pauline from Brisbane, who will also canoe the Zambezi the next day. Wine, beer and stories flow freely, with able assistance from Brian, a family friend of the Millars from Alice Springs. It’s Australia night in the heart of Africa as we watch Maggie the blue heeler and Aussie the red heeler frolic on the front lawn overlooking Lake Kariba.

Bit by bit we hear Jackie and Tommy’s story, their triumphs and tragedies in Zimbabwe, a place with so much potential.

The troubled country is showing signs of gradual improvement. Hyperinflation has ended and no one mourns the now worthless banknotes with zeros that go on forever. The Yankee dollar is the official currency, strange when you’re so far from the US.

Kariba – like Victoria Falls – is an emerging adventure destination. You could spend a week here and tommy is happy to take guests fishing on his boat at no charge. Hornbill Lodge costs $163 a guest a night but includes all meals and drinks.

On the shores we can ponder adventures at our disposal. We can explore Matusadona National Park, famous for elephants, buffaloes, lions and leopards. Or take a Natureways tiger fishing safari below the dam along the Zambezi.

Previous post The Dark Side of the Kalahari: The life of Luna the Leopard 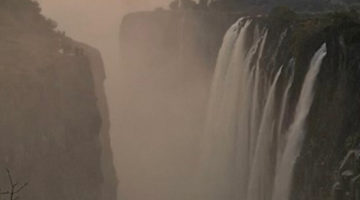 Zimbabwe: Journey to the heart of Africa