Kafue River: Threatened by degradation and loss of biodiversity

Most vital surface water bodies in developing countries are under serious threat of degradation resulting from constant discharge of polluted effluents stemming from industrial, agricultural, mining and domestic/sewage activities, and Kafue is no exception.

The most affected river systems are those traversing cities and towns in urban areas. The Kafue River in Zambia is one such river system that is threatened with serious degradation and probable loss of biodiversity.

Kafue River cuts across the country in a North-South direction, stretches for about 1,576 kilometres before draining into the Zambezi River.

Biodiversity is a manifestation of the totality of the nation’s natural and cultural heritage that needs to be understood, appreciated and used sustainably. Biodiversity plays an important function most often not recognised: The maintenance of ecological balance through processes such as water and nutrient cycling, control of erosion and thus deterrence of land degradation, regulation of climatic factors such as temperature and rainfall through carbon sequestration, and in the production of crops through pollination.

Loss of biodiversity in respect to the variety of animals, plants, their habitats and genes on which so much of human life depends is one of the world’s most pressing crises. 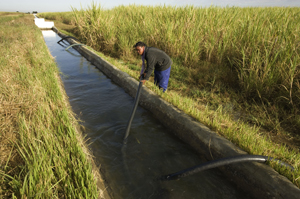 Excessive water abstraction for agricultural irrigation, domestic consumption and urban or industrial use

The main drivers of this loss are converting natural areas to farming and urban development, introducing invasive alien species, polluting or over-exploiting resources, including water and soils and harvesting wild plants and animals at unsustainable levels.

Kafue River is an important habitat for a large variety of animals and plants. These include fish, amphibians, birds, insects, invertebrates, and reptiles that live in this river, or find their food there.

The river plays a vital role in connecting habitats, and their value to plants and animals extends far beyond the surface area they cover.

This habitat connectivity role functions both between upstream and downstream areas, and by connecting both sides of river banks. This necessitates an approach to management that looks at the river basin as a whole rather than just taking into account the river itself. Without a global environment that is healthy and capable of supporting a diversity of life, no human population can exist.

In recent years, the depletion of natural resources, specifically fish, has become a major focus of governments and organisations such as the United Nations (UN). This is evident in the UN’s Agenda 21 Section Two, which outlines the necessary steps to be taken by countries to sustain their natural resources. 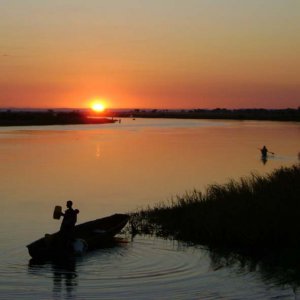 Local fisherman on the Kafue River in Zambia

The depletion of natural resources is considered to be a sustainable development issue. With regard to natural resources, depletion is of concern for sustainable development as it has the ability to degrade current environments and potential to impact the needs of future generations when in the actual sense biological resources support the livelihoods of a vast majority of rural populations and for commercial exploitation at national level.

The benefits derived from natural resources contribute to the wealth of Zambia in a number of ways – at the level of households, communities or provinces, from a variety of different sectors, including energy, tourism, food, livestock, pharmaceuticals and forestry. Ash for shifting cultivation is from burning forests and woodlands.

Medicines and other valuable chemical products are obtained from both plants and animals.

The Kafue River basin is also core in poverty reduction in Zambia since it does not only provide a livelihood for communities living in the basin but also offers life-support to industrial, mining and agriculture sectors, the majors sectors that provide employment and sources of income as well as survival to most Zambia’s urban population.

Projections indicate that about 80 per cent of Zambians live in poverty and suffer from other deprivations such as little access and poor quality of social services. The Kafue River is one of the greatest stratiform metallogenic rivers, especially on the Copperbelt Province in Zambia (Unrug, 1988 as cited by Pettersson and Ingri, 2001) and further passes through major industrial, mining and agricultural provinces in the country carrying with it a variety of pollutant loads which include chemical pollutants that may cause poisoning of the aquatic life and might eventually lead to death. 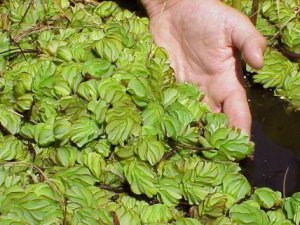 Proliferation of aquatic weeds (i.e. Salviniamolesta) may lead to eutrophication

Nutrients have been linked to the proliferation of aquatic weeds (i.e. Salviniamolesta) and may lead to eutrophication, blocking of navigation routes, increased BOD and COD concentrations, decrease in overall dissolved oxygen (DO) concentration, etc.

Furthermore, ingestion of chemically polluted water could have fatal effects to both humans and animals.

The involvement of non-governmental stakeholders and the public in policy making and implementation has been recognised as an important feature in environmental governance.

The United Nations Millennium Development Goals recognise the participation of non-State actors at all levels of governance because they act as a resource pool of local knowledge in project implementation, strengthen institutions of accountability and encourage the efficient use of resources, among others.

Participatory governance has been defined as “the active involvement of citizens in Government decision-making”.

The running and management of public affairs is not limited to the Government and public administration, but involves cooperation between State institutions and civil society groups who participate in decision-making and implementation.

Participatory governance is a key attribute of good governance, especially in states that have economies in transition, are newly democratic, or are engaging in governance reforms because it integrates all stakeholders irrespective of their status and capacity in society, and it is essential in implementing equitable sustainable development. 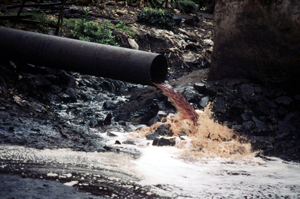 As a prospective aquaculturist/fishery biologist, speaking from the research point of view, Kafue River is very polluted with different chemicals from different manufacturing and mining companies which contribute to the depletion of the indigenous fish species in the Kafue River seeing that the effluent discharged in the river contains different chemicals and materials.

Therefore, in trying to conserve the Kafue River’s biodiversity I appeal to all the companies which discharge their effluent in the (Kafue) river, especially on the Copperbelt and Lusaka provinces to consider conserving the biodiversity of the river through restocking it with fries and, above all, to comply with the waste water regulation standard from Zambia Environmental Management Agency.

This also calls for engagement of serious measures and policies from the Government of restocking the river with fish by the perpetrators.

I must commend some mines and other companies for having taken such an initiative and challenging task of doing the restocking after realising the importance of the fish to human health in the community and, above all, the importance of conserving the aquatic biodiversity.

Indeed this is one of the corporate responsibilities that the private sector should participate in. 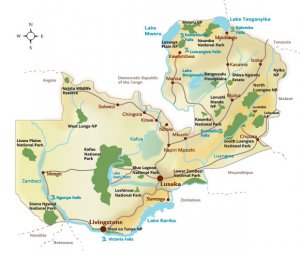 If the private, non-governmental stakeholders and the public in policy making and implementation have been recognised as an important feature in environmental governance, why then should some stakeholders fail to take the same step?

Because of its size and geographic location, the Kafue River basin is an ecosystem that provides services and support to communities and industries that have different and sometimes conflicting interests in usage of the river resources.

Next post Jetboat the Upper Zambezi to the 'Smoke that Thunders' 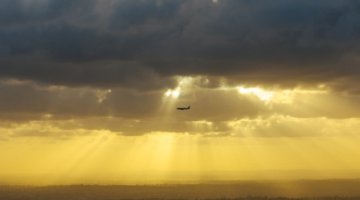