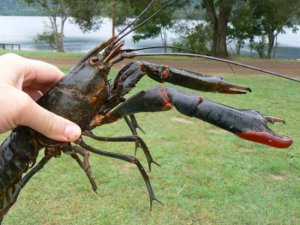 We have been alarmed at some recent news from Jecha Point Fishing Lodge near Chirundu, that the Australian Red Claw Crayfish species which has invaded the waters of Lake Kariba, seems to be spreading into the Zambezi River downstream of Kariba Dam.

The Lodge reports that, while on a fishing trip in the Zambezi  River just below the dam wall, the Jecha Point fishing guides were using fillets to try to attract Vundu (Southern Africa’s largest freshwater fish species).  They were totally surprised when their bait hooked a red claw crayfish!

“This little menace was quite tenacious and was caught in the deepest, fastest flowing water in the Kariba gorge!”, they report.  “ We will keep an eye on their advance. Hopefully someone can do some research on possible ecosystem devastation & find a way to remove these invaders before they do serious damage.”

The red claw crayfish, Cherax quadricarinatus, known colloquially in Australia as the “yabby”, is an extremely robust and invasive species.  It is known to feed on rotting vegetation and fish eggs, so the eggs of natural Kariba and Zambezi species like Tigerfish and others are at high risk.   Reportedly introduced into Lake Kariba some ten years ago from a fish farming project in Zambia, they are now breeding out of control in the lake.

The problem with the red claw crayfish is that, as an alien species, it has no natural predators in the wild here. It seems that even crocodiles don’t like them.  There have been reports that baby crocodiles still feeding on insects have been observed eating the crayfish, and some bird species like the Open-Billed Stork may be sampling them.  There is also hope that the voracious, predatory, Tigerfish may develop a taste for them.  But “yabbies” produce clusters of eggs up to half the size of a tennis ball that hatch prolifically.  So quickly have they spread, that they have already invaded most of the eastern section of Lake Kariba in shallow, rocky areas where conditions are ideal for them to breed. 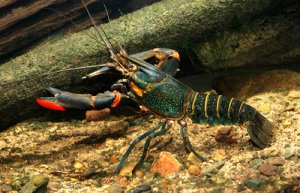 Scientists at the University of Zimbabwe’s Lake Kariba Research Institute say that they cannot be poisoned without killing other natural species.   They believe that the solution to the crayfish crisis lies in commercial exploitation, using traps similar to those used to catch lobster.  These traps are now commonly used by fishermen and houseboaters, who are catching them in large quantities in the lake.  However, despite these crayfish being an excellent source of protein and a delicacy which reaches prices around $9.00 per kg in shops and more in Harare’s restaurants, they are not yet a popular food source among the majority of the country’s local population.

Their potential invasion into the wider Zambezi River system below Kariba Dam is a serious ecological problem. 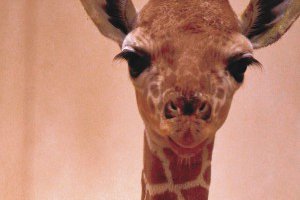