Hwange National park through the eyes of a veteran

Cheetah in the Hwange National Park

Dickson Dube bends down and picks up a hard oval object from the ground, places it in the palm of his hand and holds it out for our inspection. “Looks like eland,” says Sarah like a true connoisseur. “Looks like dung,” I say with deadpan honesty.

Dickson smiles. “Giraffe,” he says. “Same size and shape as eland, but flattened at one end.” I’ve never really had much of an interest in dung, but I’m beginning to realise that if I’m ever to be a true man of the bush it’s time I changed my ways.

“But look at this.” Dickson points the barrel of his gun at a neat pattern of indentations in the sand. “Fresh this morning.” We stare down at four oval shapes around a larger irregular pad. This time – along with a surge of adrenalin and a hammer-beat in my chest – I immediately recognise what I’m looking at.

“Lion,” confirms Dickson. “You can always tell the cat family as they have three lobes at the bottom of the large pad. The dog family, like hyenas, only have two lobes and they also have claw marks at the front. Unless, of course, it’s a cheetah. Cheetahs are the only cats that can’t retract their claws.” He pauses and stares into the distance in the direction the tracks are heading. “I think now might be a good time to head back to the vehicle.” 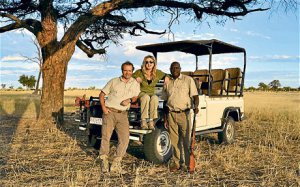 There is always a special thrill to walking in the bush. Although walking guides are specially trained and always carry a gun – a .375 Holland & Holland Magnum round can stop a charging elephant in its tracks – the sense of vulnerability puts all your senses on red alert.

The rustle of a leaf; a sudden burst of movement in the long grass; the warning calls of birds; the alarm call “sneeze” of an impala; vultures circling overhead: all are signs that there may be a predator nearby. In a vehicle you can watch the game while idly anticipating the delicious meal that awaits on your return to camp. On the ground, it’s you who might be the meal.

Dickson is a 25-year veteran of Zimbabwe’s Hwange National Park, and we were beginning to realise what an honour it was to have him lead us around. A guide can make or break a bush experience; while most are very knowledgeable, the ability to share that knowledge in a way that both inspires guests and meets their own understanding of the bush halfway is a rare skill indeed.

Hwange was the first game park Sarah visited when she lived in Zimbabwe 20 years ago and has a special place in her affections. Happily, Hwange still delivers some of the very best game experiences in Africa. By our third day we had seen two prides of lion, a leopard, a herd of 400 buffaloes and innumerable antelopes and spent a thrilling couple of hours watching a cheetah stalk its prey. Not to mention a very rare sighting of two hippos mating in a waterhole – females of the Homo sapiens species, be very thankful you were not born Hippopotamus amphibius!

Then there were the hundreds (literally) of elephants we watched at close quarters from the log-pile hide beside the waterhole at Little Makalolo Camp as breeding herd after breeding herd came down to drink. Watching the family interactions was mesmerising: babies learning how to use their trunks; an adolescent chasing away a thirsty sable antelopes; the matriarchs keeping a wary eye out for predators.

“Little Mak” is a bush camp in the classic style. Small and intimate, it is hidden away in an area of mixed woodland and savannah grasslands in the south east of the park at the heart of a private concession. The dining and living areas are centred upon a campfire looking out towards the waterhole. Elephants, hyenas, leopards and lions regularly roam around the tented accommodation at night. 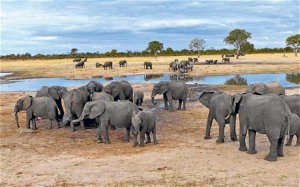 Elephant at the waterhole in Hwange National Park

Around the campfire after dinner, under one of the darkest night skies we have yet seen in Africa, Dickson spoke with passion about Hwange’s long history and his sadness that the British have stopped visiting. Like many of his countrymen, he won’t talk politics, but the message is clear: “Hwange has some of the best game viewing in Africa. We have perhaps 35,000 elephants and huge herds of buffaloes. Since hunting controls were tightened in 2000, Hwange’s lion population has doubled to around 450.”

Ah yes, those lions. On our first sighting, we watched as two large males strode side by side across an area of open grassland as Dickson filled us in on their CVs. “These two boys formed a coalition and took over from a dominant lion who had been in control of a pride of 21 for four-and-a-half years. That’s a long time for a lion; normally it is more like two years. Now the pride has split and the sub-adult females have mated with the new lions.”

We managed to find “our boys” on most days and on one occasion followed one of them at close quarters after nightfall as he marked his territory, spraying on bushes and letting out a series of blood-curdling basso profundo snarls that seemed to make the air around us vibrate. At night, this sound is particularly full of menace and can be heard up to five miles away, acting as a deterrent to younger males looking for a pride of their own. 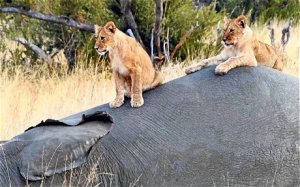 Lions climbing ontop of an elephant in Hwange National Park

Our final, and most memorable, sighting was of the pride feasting on an elephant that had died of natural causes. The cubs gorged themselves on the soft meat of the elephant’s trunk before turning its belly into a giant climbing frame. Nearby, the four lionesses rolled around play-fighting and gently clubbing the youngsters.

Halfway through this touching family scene, one of the dominant males materialised out of the bush, greeting one of the lionesses with an affectionate sloppy-tongued lick down her back and around her neck. Despite their terrifying ferocity when hunting or fighting, lions are one of the most social of species, their interactions a joy to watch. We’ve seen plenty of the “red-in-tooth-and-claw” type of lion behaviour; this was as near to the Disney version as we are ever likely to get. 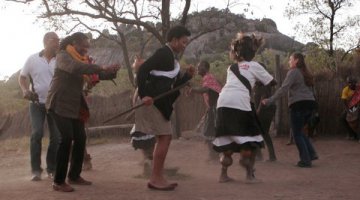