ZANIS reports from Livingstone that the First Lady said this when the Korean government officially handed over three small libraries to the three schools, in Livingstone a couple of days ago.

Dr. Kaseba explained that the small libraries will create an enabling environment by reducing illiteracy levels and will help the country meet the Millennium Development Goal (MDG) on education.

She noted that much investment in the education sector has the potential to open a country by improving the economy.

She said in the past several decades countries such as Korea that have invested so much into education have helped to reduce poverty, increase literacy levels and have developed economically among other things. 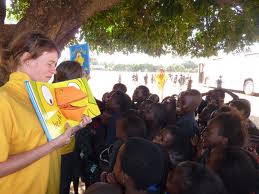 Reading a book to the children at Dambwa Primary School

“In the 70’s Korea was one of the countries with the lowest economic situation but due to major investment in education it is now a major power economy which records more than $30 000 in contribution to its GDP”, she said.

She pointed out that Zambia can learn from Korea and make a transition.

Dr. Kaseba –Sata said despite Zambia recording a high increase in enrollment of basic education, much still needs to be done to strengthen the quality of education children receive.

“There is also a need to improve access to appropriate information and books to help achieve quality education. You parents, teachers, guardians need to encourage the children from a tender age to take up reading as it gets them motivated and knowledgeable as reading makes you a critical thinker,’ she noted.

Dr. Kaseba further called on cabinet to consider increasing the funding to the ministry of education as it is key to sustainable development and also key to the prosperity of Zambia.

And speaking earlier minister of education Dr. John Phiri said the demand for small libraries is overwhelming currently and thanked the Korean government through UNWTO Sustainable Tourism for Eliminating Poverty (UNWTO STEP) Foundation for the donation.

Dr. Phiri said the gesture is key to changing the reading culture of children and that education remains key to achieving a positive impact in society.

He noted that the increased enrollment of children at primary level will help the country move closer to achieving MDG in education to achieve universal primary education. 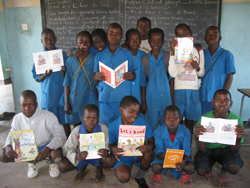 He said this is an abide to help reduce illiteracy levels and will continue doing what it can to assist in creating more small libraries.

Mr. Yinryong praised Zambia’s Tourism minister Silver Masebo for approving the opening of the small libraries as it will benefit a lot of children.

And in a vote of thanks Diane Lungu, from Holy Cross school special Unit, thanked the government of Korea and Zambia for the donation.

Ms. Lungu said the library will help pupils in terms of research and help improve their reading culture as well as improve their computer skills.

She assured the donators that the small libraries will be taken good care of and that they will even be used by the future generation to come.

The donation also included the buying of 2 800 books which were bought locally with only 8 coming from Korea as well as several computers.

The event was also characterized by song and dance from different traditional groups as well as poems from children at Dambwa Primary where the event was held and a dance by the deaf from Holy Cross School.