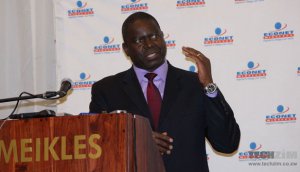 Econet Wireless Zimbabwe has marked the joint hosting by Zimbabwe and Zambia of the United Nations World Tourism Organization (UNWTO) general assembly by launching one of Africa’s first Long Term Evolution (LTE) networks. The LTE will be launched in the resort town of Victoria Falls, where the assembly will be held from August 24 to 29.

The new technology, which is still not available in most European and Asian countries, is also known as “4G” and allows the fastest mobile Internet speeds possible on a cell phone.

Commenting on the launch of the service, Econet Wireless CEO Mr Douglas Mboweni said the hosting of the tourism event was an opportunity to show the world that Zimbabwe “is not dead and buried; we are very much alive, and we have kept pace with developments in the world.”

Mr Mboweni said that his group of companies, which includes sister companies Liquid Telecom and ZOL, have invested heavily in ensuring that telecommunications services in Victoria Falls are world class.

Meanwhile, Mr Mboweni has said that work is already in progress to launch 4G in the major cities, including Harare.

“The business community in Zimbabwe uses our network almost exclusively, and we have a duty to ensure that they have the most advanced services available,” said Mr Mboweni.

Econet Wireless was one of the first operators in Africa to launch 3G well before countries like India and Nigeria. As a result, Zimbabwe was recently declared by the GSMA to be the country with the highest percentage of Internet access by cell phone in the world, at just over 58% of all Internet users in the country.