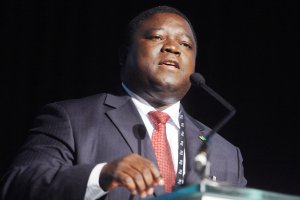 The newly-constructed international terminal building at Harry Mwaanga Nkumbula International Airport in Livingstone will be opened for use this week by delegates to the United Nations World Tourism Organisation (UNWTO) General Assembly although the commissioning of the facility will be done after the conference.

Transport Works, Supply and Communications Minister Yamfwa Mukanga said the Government would open the new terminal building to the UNWTO delegates this week, while the few remaining works as well as the commissioning would be done after the General Assembly.

Mr Mukanga, who was inspecting construction works at Harry Mwaanga Nkumbula International Airport yesterday, said the new terminal was almost ready for use as about 98 per cent of works had already been done.

The new terminal building would have two boarding gates, five club lounges, 30 retail spaces and viewing terraces, among other facilities.

Mr Mukanga said about K190 million had already been spent on the state-of-the-art facility.

“I am impressed with what I saw here and it is a good job. You can continue improving the outside without disturbing operations inside.

“We are looking forward to totally completing the new terminal building and then set the date for commissioning after the UNWTO conference,” he said.

Mr Mukanga said President Michael Sata wanted to see quality in the facility because it was tax payers’ money being used.

“Since independence, we did not have such structures. The Patriotic Front (PF) has come and it is doing what was not done before. We are putting into practice everything we promised people. Our promises are bearing fruits,” he said.

And the 20th session of the UNWTO General Assembly to be co-hosted by Livingstone in Zambia and Victoria Falls town in Zimbabwe starting this weekend has recorded unprecedented high turn-out of delegates who had registered to participate at this year’s event, Tourism and Arts Minister Sylvia Masebo has said.

Information and Broadcasting Services Permanent Secretary Amos Malupenga said a fully-equipped media centre with not less than 50 desktop computers as well as 20 laptop desktop points and broadband wireless internet service would be put in place at the conference venue to enhance media coverage.

Ms Masebo said UNWTO executive director Zoltan Somogyi congratulated her last week for attracting many countries to participate in this year’s General Conference for the first time in the history of the event.

She was speaking in Livingstone at Protea Hotel on Saturday during the commemoration of the Southern African Development Community (SADC) Day which fell on August 17, 2013.

Next post UNWTO 2013: Biggest event on the International Tourism Calendar