Every day on the move Isabel will run a half marathon (21km); cycle 80-100km and, from Namibia onwards horse ride portions wherever possible. Assisted by Raphaela and Lloyd as support team and filmer she will cover an approximate distance of 10 000 km in about 5 months.

Isabel under the ‘Big Tree’ in Victoria Falls

Lloyd has been training for this but an old injury has played up. After an MRI scan he was advised by an orthopaedic surgeon that it would not be a good idea to go on an extreme physical journey like this.

She is currently in Victoria Falls, Zimbabwe, and this is how she is getting on:

We got to Victoria Falls two days ago and we have been networking with a local anti-poaching organization and the media, we have re-stocked our supplies and planned the next stretch ahead.

Most likely we will carry on tomorrow towards Hwange National Park and Bulawayo before heading back into Botswana at Francistown as we don´t want to leave out the Khama Rhino Sanctuary just outside Serowe and the Tuli Block. 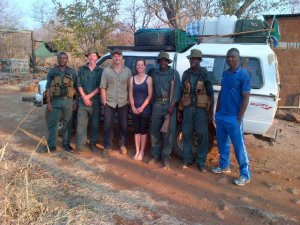 Today it’s exactly 12 days since leaving Maun and moving on without Lloyd… To be honest the first couple of days it has been very strange without him! His gentle and experienced guidance that’s always there was missing and it took time to get used to that. At the same time Rappi and I had to adjust to new found responsibilities and tasks that Lloyd took care of daily, which suddenly seemed bigger and heavier once they weren´t carried anymore.

I am not an anxious person, but two girls and a ridgeback on their own travelling through areas that are teaming with wildlife, require me to be aware and to pay attention all the time! When camping in the bush on the side of the road, we have to be very aware of elephants, lion, hyena and more. For some extra protection we have been given a trick by an old timer, who told us to walk a 30m circle with chilli powder around our camp as elephants hate the smell and will stay well away from it!

Having Mr P, our guardian angel, with us is a true blessing as he looks after us and keeps us safe at all times. (At night time he is the lucky one that sleeps safely on the backseat of the pickup though…)

Botswana is a safe country, some say it’s one of the safest countries in Africa, and I have to agree with them. Since leaving Durban on May 1st we have never felt threatened or unsafe and whilst travelling through Botswana the goodness of people became even more evident. No one showed contempt, distrust or negativity and the warm and hospitable people we met on route from all race groups are testament to that.

Isabel riding along the road through Botswana

Our route took us from Maun through the Makgadikgadi Pans National Park to Nata. From there we headed south to Francistown, as we wanted to use the opportunity to address more school kids before the holidays start! After two great talks we made our way back to Nata to head north to Kasane and the Kazungula border into Zimbabwe and to Victoria Falls. To date I have run and cycled over 6200km through South Africa, Namibia, Botswana and now Zimbabwe. We are well over halfway and are slowly looking at completion and into organizing an event for it!

Sometimes people ask whether we are making a difference and I can say with certainty, “yes we are”. The feedback we are receiving from pupils, parents and teachers after we have been to a school is amazing and truly is a sign that we are on the right path.

We have just uploaded two new Episodes (10 & 11) to our Rhino Knights Youtube Channel after a long silence due to a lack of upload opportunities. We hope you enjoy watching them and please share them further!