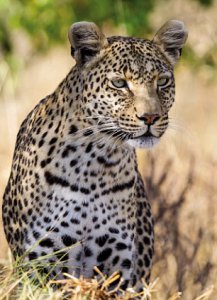 Spot the wildlife – A leopard in the bushveld

The Angolan Minister of Hotels and Tourism, Pedro Mutindi, called for the member countries of Kavango Zambezi (KAZA) Transfrontier Conservation Area (TFCA) to be united for the materialisation of the initiative for the benefit of all.

Speaking at the closing act of the KAZA ministers meeting, held in Menongue City in the southern Kuando Kubango province, the Minister, who has chaired the meeting, highlighted the need for the member countries (Angola, Zambia, Zimbabwe, Namibia and Botswana) to be more and more united so that issues related to economic, academic, social and tourist development may be achieved.

At the opening of the meeting the governor of Kuando-Kubango province, Higino Carneiro announced that two aircraft will be made available for air patrol and transportation of personnel deployed at the Luiana, Mavinga, Mucusso and Luengue parks for the protection and management of wildlife resources. The ministers of Zambia and Namibia, Sílvia Masebo, and Huaekua Herunga, respectively, attended the meeting.

The Kavango-Zambezi (KAZA) Transfrontier Conservation Area is situated in the Okavango and Zambezi river basins where the borders of Angola, Botswana, Namibia, Zambia and Zimbabwe converge.

It is set to become the world’s biggest conservation area and will eventually span an area of approximately 520,000 km2 (similar in size to France). It will include 36 national parks, game reserves, community conservancies and game management areas. Most notably, the area will include the Caprivi Strip, Chobe National Park, the Okavango Delta (the largest Ramsar Site in the World) and the Victoria Falls (a World Heritage Site and one of the Seven Natural Wonders of the World) and has the potential to insulate the region from the effects of flooding and climate change. The natural resources contained in the KAZA TFCA are also critical to the sustainable development of the region on account of their inherent and enormous socio-economic value.

Kavango-Zambezi promises to be southern Africa’s premier tourist destination and vitally important wildlife refuge, with the largest contiguous population of the African elephant on the continent, representing over half the total population.