Tigerfish is a must catch on a fly fishers’ bucket list

The toothy tiger fish, known as a freshwater barracuda, is a must-catch on a fly fishers’ bucket list. Record outdoors correspondent Peter Ottesen caught this one on the Okavango River in Botswana.

An immense crocodile hissed and leaped into the murky Okavango River, parting the tall, wispy papyrus as it bolted for safety. My guide, a river Bushman, didn’t seem to notice. He was intently looking at “nervous water,” a thin break in the swift current that would likely hold our carnivorous quarry: African tiger fish.

The Bushman, known as “Fish,” was born at a village near Nxamaseri Island Lodge in northern Botswana’s river panhandle that feeds life-giving water to the Okavango Delta – an extraordinary 4,000-square mile complex of rivers, sloughs, wetlands and islands – set in the middle of the Kalahari Desert, otherwise typified by sand, thorn trees, sun-bleached grasses and desolate salt pans.

July is the dry season, in the middle of winter, but the Delta is replete with water that takes months to flow some 1,500 miles from the mountains of Angola and through Namibia, before meandering to the edge of desert, where it evaporates. With water come the animals and the migration of the ferocious, predatory tiger fish.

Renown fly fishers, such as Lefty Kreh and Ed Rice, owner of the International Sportsmen’s Expositions, have come to this wilderness lodge to tangle with tiger fish, a fierce toothy combatant with a penchant for jumping clear of the water and taking line in a heart beat. That was my goal, too. 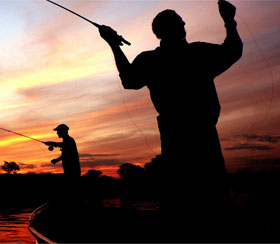 Fly fishing from a mokoro

Botswana operates on high-cost, low-volume ecotourism, making it a prime African destination for game viewing and big-game fishing. The Okavango Delta is the star attraction and the frontier town of Maun, complete with a tiny international airport, is the jumping off point for safaris, with daily flights from Johannesburg.

After clearing security, we hopped aboard a single-engine Cessna and 45 minutes later were circling an airstrip surrounded by dense woodland and water, with brush growing from the runway. The pilot buzzed the site twice to chase off livestock, antelope and monkeys, before final approach and touching down in a cloud of dust.

“Ever land here before?,” I asked.

“No, this was the first time,” the pilot responded. “Most of my passengers select lodges with lots of animals, not an island to go fishing.”

For my wife, Alexandra, and me, Nxamaseri would be the third of four tented camps. After she had an opportunity to ride African elephants and see leopards within an arm’s distance, I figured two days fishing in an attempt to hook tiger fish – among the top 5 species on my bucket list – seemed reasonable. 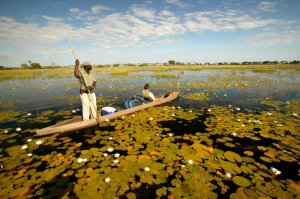 While I fished, she preferred to bird watch from a mokoro, a dugout canoe. Her preference was well founded as she spotted fish eagles, herons, egrets and storks in an afternoon excursion. I went without a strike.

Four hours of flinging a 9-weight rod with a fast sink line and wire leader, trailed by a large black Clouser proved fruitless. The Bushman, baffled by our lack of success, turned to explaining how to peel and eat the roots of papyrus and bulrush – staples of his tribe. The sun dropped from the southern sky signaling it was time for a horn.

Next morning at sunrise, with screeching monkeys seeming to mock us, we tried a new approach, casting upstream in the middle of the river, not next to the vegetation on the edge. Sure enough, after counting to 10 before stripping in, I set the hook on a tiger fish that bolted at an abrupt right angle and soared into the sky before splashing down and ending nearly 150 feet from the boat.

“Good one,” said the Bushman, sporting a wide grin. “Maybe my name is better now.”

After minutes of high-flying action and a singing reel, I turned the bright silver fish, with blue hues and an orange forked tail toward the flat-bottom boat, hoping its inch-long, razor sharp teeth wouldn’t chomp through the leader.

Tigerfish in the Okavango Delta

My happy guide clamped onto my 5-pound prize with a Boga-Grip, a device that would keep him from being bitten.

“Look at my hand and arm, they are scarred,” he said. “It’s the price I pay for guiding for tiger fish. They try to eat me.”

Indeed, I’ve never witnessed a fish with such tenacity or fury that I first read about in “The Longest Cast: Fly Fishing in Southern Africa.”

I caught another dozen tigers on various flies during two intense days of catch-and-release fishing before we were off to Kings Pool Lodge, where King Gustav of Sweden used to hunt.

After catching tiger fish, a breeding herd of elephants that blocked the way to our tent didn’t seem quite as imposing.

Information on fishing for tiger fish: info@nxamaseri.com. Our safari to Botswana was organized by Frontiers International of Wexford, Pa. 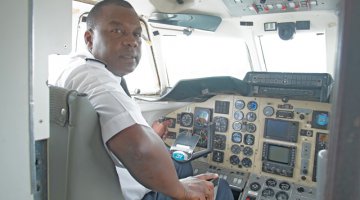