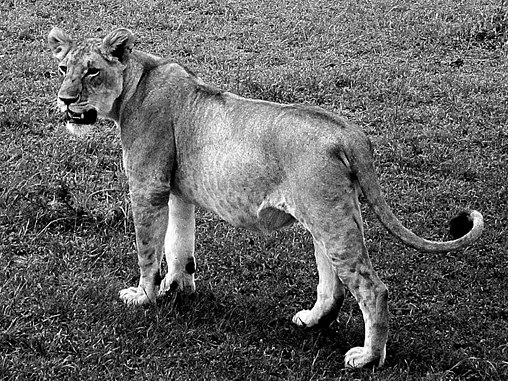 Lions are one of Africa’s iconic species, and yet they are under threat from habitat loss, conflict with humans, and many local factors. Seeing these social cats in the wild is becoming an endangered privilege, with having had the first World Lion Day we’ve come up with a list of the best destinations and specialist guides for observing the King of Beasts.

Everyone going on an African safari expects to see lions, but there are fewer than you might think. According to a recent Duke University study, the continent’s population has dropped more than two thirds in the past 30 years to perhaps less than 32,000 lions, and the species has lost 75 percent of its former range and gone extinct in 26 countries.

Among the top lion spotting destinations in Africa you will find Botswana, Zimbabwe, Namibia and Zambia. Most of the continent’s lions survive in the national parks and reserves of the above mentioned.

The camps and guides below specialize in lion observation while also offering great general game viewing. Be aware that you may have very different types of lion sightings depending on the terrain and your safari type (walking, game drives, canoeing, etc). Pride behavior shifts from territory to territory depending on the group’s size, seasonal game movement, rivalries between male lions, and pressure from other predators such as hyenas.

Within Botswana’s Okavango Delta, GPC’s Duba Plains has exclusive access to a unique lion habitat: a permanent island where a large buffalo herd, trapped by surrounding water, engages in an epic battle with resident lions who have become buffalo hunting specialists; following the buffalo herd during a three-day stay allows many guests to observe a full hunting cycle.

“A guide at Duba Plains will know more about lions in a year than any guide in the world. It’s lion boot camp,” says Dereck Joubert. Guests particularly praise guide James Pisetu for his awareness of Duba’s ecosystem. Lion prides living in proximity often behave very differently because of subtle changes from territory to territory, so it’s worth dividing your Okavango safari between several locations.

At Selinda Explorer’s Camp, Kane Motswana is a San Bushman who applies his traditional tracking skills to a smart, unique almost spiritual style to guiding around a permanent channel linking the Okavango Delta with the Linyanti and Kwando water systems, where lions are sometimes seen preying on hippos. 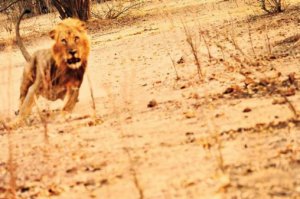 This male lion mock charged the photographer while he was on a walking safari with Nick Murray in Mana Pools National Park, Zimbabwe

If you’re brave enough for an “up close and personal” lion trek, Nick Murray, owner of Vundu Camp in Zimbabwe’s Mana Pools National Park has been conducting walking safaris for the past 23 years, enabling “guests to approach wild lions more closely on foot than anywhere I know in Africa,” says Mark Nolting.

The park lion population stands at about 120, divided between four prides that hang out near the Zambezi river, and four more in the remote Chitake Springs sector. Depending on the situation (lions may be more aggressive while they are feeding or tending young cubs), guests approach on foot to about 50 yards then crouch down and approach in tight formation to about 20 yards. “We’ll sit down and quietly observe, sometimes getting even closer by scooting forward together on our backsides,” says Murray.

“Before setting out we go over safety procedures, such as staying in a group behind me, and never turning your back or running from a lion.” The walking safaris operate from May until the start of the November rainy season. Prime time is August through September, before dry season temperatures become too hot, and to catch both lions and the wild dog denning season. Murray says the local lions are generalists as hunters but have become especially adept at taking down impala which live in the thousands around Mana Pools.

In Namibia, lions have adapted to desert conditions. Nine prides have overlapping territories in the Skeleton Coast National Park and the bordering Kunene region, and community lands between the Hoanub and Kunene Rivers.

Occasionally lions wander east to scavenge sea lions and beached whales on Namibia’s wild Atlantic coast; more commonly they hunt gemsbok (oryx) and smaller desert antelope. Every safari is a crap shoot, and there are no guarantees of seeing such behavior, but the family-run Skeleton Coast Safaris has operated in the park since 1977 using small planes and 4x4s to cover the territory.

Open from June to October, the remote Lion Camp within Zambia’s South Luangwa National Park is so named for frequent lion sightings, which managers tweet at @lioncamp.

Nine thatch and canvas tents are linked by raised wooden platforms; and general game viewing is excellent, according to travel specialist Cherri Briggs, founder of Explore Africa and who has a home in Zambia. The new U.S. Honorary Consul to Zambia, Briggs is also the sibling of Dr. Michael Briggs, a zoologist and cofounder of the African Predator Conservation Research Organization.

As a result, Explore Africa clients have inside access to several lion research projects in southern Africa.

Previous post Himba: Experience the magic of a smartphone