Himba: Experience the magic of a smartphone

Of all the tribes that still inhabit Namibia, the Himba are perhaps the most interesting.

iPhones: so simple, even a child could use one. A Namibian child, that is. One who’s never even seen one of those old rotary-dial landline phones, let alone the photo-snapping, email-sending super-gadget he now has in his tiny hands.

The kid turns it over and over, trying to figure out where the sound is coming from, where the music is being made.

Eventually he tires of that and just surrenders himself to the fun, dancing a little jig with the phone in his fist, his loincloth flapping about, dust rising into the air near his feet, a huge grin spreading across his face.

Then he stops and does what millions of adults and children around the world have been doing for the past couple of years: he hits the big button underneath the phone’s screen, then starts jabbing the panel with his fingers, trying to make it work. So simple, even a child could use one.

The phone doesn’t function as a phone right now, of course, because we’re out of range. We’re out of range of pretty much everything here: phone signals, internet signals, TV signals, modern society.

It took three days of driving on dirt tracks to get here; rough, corrugated dirt tracks through vistas of barren hills slashed by riverbeds and ancient canyons.

This place called Puros is officially a proper settlement – it’s marked on the map with the black dot that represents one – but it certainly doesn’t look it. It’s just a collection of mud huts in the middle of the desert, a one-horse town that appears to be missing its horse.

The campsite we’re staying in is a few kilometres away in a dry riverbed, the only place around here with shade. It’s cooler there, but the downside is that it’s also popular with the herds of desert elephant that wander these plains. They roam up and down the bed in search of water, occasionally tramping through the campsite, mowing down anything in their path.

That probably explains why the Himba haven’t set up camp there. Their village is above the old watercourse, in a desolate, hot clearing in the dirt and sand, an outpost surrounded by sticks and branches that have been fashioned into a fence.

Of all the tribes that still inhabit Namibia, the Himba are perhaps the most interesting. They don’t have the amazing horizontal hats of the Herero, or the inventive instincts of the Topnaar, but they do have a way of living that’s completely alien to Westerners. 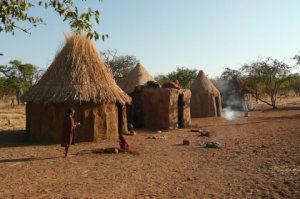 Their settlement here is remote to say the least. Puros, the town that isn’t really a town, is a good two-hour walk to the west. The nearest hospital is a couple of days’ drive away. The closest school probably about the same.

But we’ve made it here for a short tour and a little cross-cultural interaction. We’ve been met at the gates by a small group of children, shy at first, all wide eyes and open mouths, before they’re enticed over by the little white box that plays music.

Soon they’re joined by the elders of the village, women naked from the waist up, their skin stained red by ochre, their hair shaped into magnificent crowns, the intricate designs moulded with mud.

You might not know anything about their culture, but you know the hairstyles and the dress. You’re never in any doubt about the tribe to which they belong.

This village is a group of low conical huts. Women gather around a fire at one hut, cooking food. Older women sit outside another, smoking tobacco through metal pipes.

The men are all out tending the herd, we’re told. There are cattle out there.

We stare at the Himba, with their bare chests and muddy locks piled high. They stare at the tourists, with our bright clothes and dark sunglasses fixed on faces. (“What’s wrong with their eyes?” one of the Himba apparently asked Dux, a worker at the campsite. “Can’t they see?”)

But then I realise that we’re still being followed around by a smiling child with an iPhone. It’s a small connection for our two tribes to make, maybe through music, or the little box that’s playing it. But it’s a connection nonetheless.

I just need to figure out how to get my phone back.