At least sixty members of Kavango Zambezi (KAZA) Transfrontier Conservation Area (TFCA), among Angolans and foreigners, met on Sunday in Menongue city, in the southern Kuando Kubango province, where they analysed, among other issues, the financial sustainability strategy for the referred project.

This was to the press by the executive coordinator of (TFCA) for Angola, Amélia Cazalma.

She said that the participants analysed the current progress of KAZA, its financial sustainability, as it is an organisation supported by some donors.

According to her, KAZA is meeting so that thast donors or member countries to start pondering on the financial sustainability of the organisation, to be discussed today in the TFCA ministerial meeting in Kuito Kuanavale municipality in Kuando Kubango province..

The Kavango Zambezi (KAZA) Transfrontier Conservation Area is situated in the Okavango and Zambezi river basins where the borders of Angola, Botswana, Namibia, Zambia and Zimbabwe converge.

It is set to become the world’s biggest conservation area and will eventually span an area of approximately 520 000 sq. km (similar in size to France). It will include 36 national parks, game reserves, community conservancies and game management areas. Most notably, the area will include the Caprivi Strip, Chobe National Park, the Okavango Delta (the largest Ramsar Site in the World) and the Victoria Falls (a World Heritage Site and one of the Seven Natural Wonders of the World).

Kavango Zambezi promises to be southern Africa’s premier tourist destination with the largest contiguous population of the African elephant (approximately 250 000) on the continent. Conservation and tourism will be the vehicle for socio-economic development in the region. 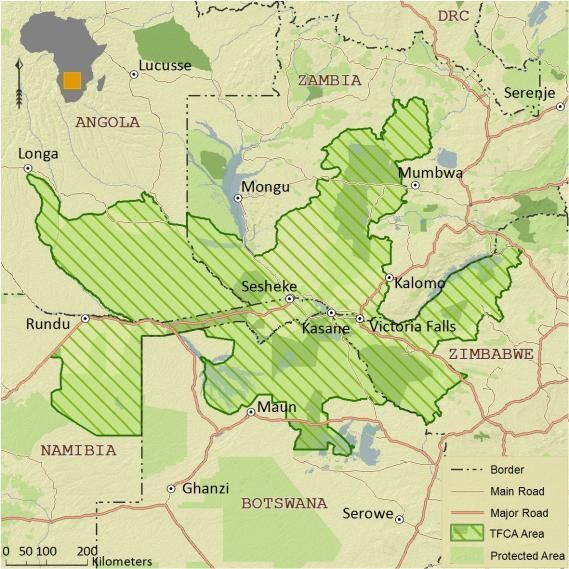 Zimbabwe/South Africa: All Set for Copa Training Camp in SA