Zebra mare and her foal

Swakopmund was abuzz last Friday morning after a zebra mare and her foal were spotted at Vineta – followed by a frantic attempt to catch them and return them to the wild.

“A zebra just ran past my house down the road,” said Vineta resident Chris Nel, when alerting The Namibian. He sounded baffled.

Nel’s home is next to the Swakopmund Primary School, which is fairly close to the the Vineta beach, just south of the La Mer waterfront development. A zebra (uncertain whether it was the mare or the foal) was also spotted near the Mole beach earlier that morning.

The mare and foal had seemingly been separated by then.

The Swakopmund Neighbourhood Watch, wildlife wardens, police and municipal traffic officers were in a coordinated effort to isolate the striped animals from the Namib in order to tranquilise them and take them back to the desert. 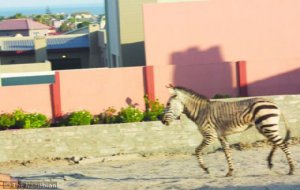 The zebra mare inside a yard in Ocean View before it scaled the boundary wall and darted for the plains towards the DRC informal settlement.

This attempt resulted in a wild zebra chase along the beach, through the Vineta and Ocean View suburbs, over the Henties road and across the plain past the DRC informal settlement towards the new Swakopmund waterworks.

One of the mare’s stop-overs before darting for the plain was inside a yard in Ocean View. It seemed as if she was cornered as her pursuers attempted to surround the house and keep her at bay.

With a stroke of athletic genius however, this seemingly smaller sized zebra managed to scale the yard wall and dart for the plains. She was followed by a line of pursuers in vehicles. It was eventually just north of the new waterworks that an opportunity arose to tranquilise her since she was slowing down because of sheer exhaustion in her flight from humans and cars and cameras.

No one could really say from where the zebras came, or why they had come so far into a residential area. There were only guesses as to their origin.

The Vogelfederberg near the zebra pans and Ganab inside the Namib Naukluft Park are believed to be the closest areas from where the animals could have come from – between 50 and 100 kilometres from Swakopmund.

The mare was taken to Ganab but the foal was nowhere to be found. It is much safer there than anywhere near roads or built-up areas where her life would be at risk – either of being hit by a car or hunted for the pot.

“We believe it continued north and then managed to make its way to the desert. It will be safer there too,” said Peter Baron van Ginkel of the SNW.

A few years ago a wild cheetah made its way into Swakopmund, causing quite a commotion. It was tranquilised inside a yard in Vineta and was returned to the wild. It may also happen that a springbok will also may end up in town from the nearby Rossmund golf-course, while a flock of bushfeld guinea-fowl have decided to make their new home near the sea. Walvis Bay has also seen oryx once in a while.

“All we need now is an elephant coming to town. That would be interesting,” said Van Ginkel.