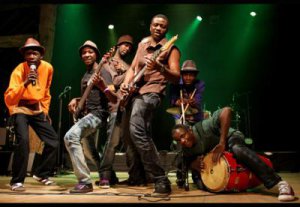 Drawing heavily on their cultural Tonga roots, Mokoomba’s infectious rhythms, dancehall styles and soulful high notes are getting audiences on their feet.

Characterised by the lush backdrop of their Victoria Falls homeland, one of Zimbabwe’s most exciting new musical groups is now officially an international act. Mokoomba had the whole crowd rocking at last weekend’s Womad Festival, won over by an irresistible mix of Congolese ‘soukous’ guitars, funk rhythms and a combined percussive talent that seems to ooze from each of the six members. Vibrancy is the key word here, as was explained to me by bassist Abundance Mutori.

“The name ‘Mokoomba’ translates as the vibrant life that our river, the Zambezi, gives to the Tonga people. We fish from it and fetch water – it’s our daily source of life.”

The group rose to national fame by winning a string of competitions laid on by Music Crossroads International – a non-profit organisation that supports musical education throughout Zimbabwe, Mozambique, Malawi, Tanzania and Zambia. These successes led to a place in Crossroads International’s climactic InterRegional festival held in Lilongwe, Malawi.

Mokoomba again took first prize, beating, among many others fellow countrymen, Gwarimba, an afro-soul band from Harare. While this clash between city music and country music was wholly good-natured, Mutori translates the lyrics of their song ‘Mangogo’, an advert for maintaining strong family ties, as crucial to the group’s core beliefs:

“I need to go back home to see my mother and father; something in this city keeps holding me back.”

Family, Tonga culture and the Zambezi River are essential to Mokoomba. They have a lot to thank their culture for; long before the opportunities Crossroads International offered, the Tonga initiation ceremony into manhood kick-started Mokoomba’s musical education.

“When they are aged between ten and twelve, all Tonga boys spend six months in the bush with the elders”, explains Mutori. “Many of the ceremonies focus on singing and percussion. Six months is a long time and it is hard work. There’s a song on our debut album, Rising Tide, called ‘Masangango’ that addresses all these feelings. For a 12-year old, this is a long time to be away from your family. It’s how we grow up. And, as part of becoming Tonga men, all the members of Mokoomba learned how to sing and play percussion.” 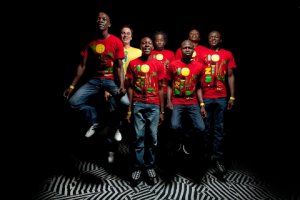 Lead singer Mathias Muzaza fronts the group with a mixture of vocal styles to match Mokoomba’s eclectic lyrical themes. He revels in a gruff, dancehall-esque style when Mokoomba is in full party mode, his voice bouncing over the rhythm with impeccable timing. When he goes soulful, Muzaza hits high notes that make the crowd whoop in admiration. On ‘Yomba’, a song addressing HIV and AIDS, Muzaza becomes overcome with emotion. The band slows, and Muzaza shouts out his message, drenched in sweat, before covering his face with his hands.

“We tell young people to abstain from sexual activities and to get tested”, Mutori explains. “If you know you are HIV positive, you can protect yourself and use precaution measures. HIV is a daily problem not just in Zimbabwe but throughout Africa. People are frequently reminded of Southern Africa’s shocking HIV and AIDS statistics. Now consider how many people have had their lives affected, not just in a personal battle but by sharing the lives of their loved ones.”

Fundamentally though, Mokoomba is here to bring Tonga music to an international stage. Mutori coolly deflects all questions relating to politics. Mokoomba has instead focussed its infectious energy towards bringing one of Zimbabwe’s lesser represented ethnic minorities to the world. “We play Tonga music”, Mutori says proudly, “and now it’s making audiences the world over want to dance”. 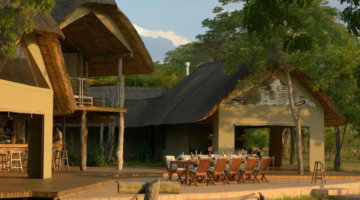