Snapping At The Heels Of Giants: The Elephant Bunker

Gerhard “Guts” Swanepoel of Pangolin Photo Safaris has won the black and white category in this year’s Botswana Wildlife Photographer of the Year awards with his striking image of a baby elephants trunk holding a small pebble.

As more and more people take up photography as a hobby and with the proliferation of digital cameras and sophisticated editing software it is becoming increasingly difficult to take a “unique” image – something that you can post with confidence to your Facebook wall and sit back and watch the “likes” roll in.

Pangolin Photo Safaris was born out of the demand from their clients to get them in positions where they will have a better than average chance of getting a great shot and although there are never any guarantees that the subjects will cooperate, with the right drivers, vehicles/boats and onboard expertise at least the odds start to fall in your favour. 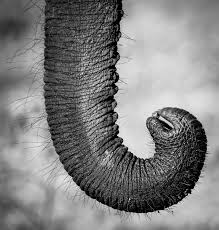 Its for this precise reason that they have recently completed construction of their latest advantage point which is already affording our clients some fantastic photo opportunities from a very unique point of view.

The picture below was taken from Pangolin’s Elephant Bunker which is situated in The Lesoma Valley just outside the Chobe National Park in Northern Botswana.

Guts, as he prefers to be known, is also a co-owner of Pangolin and has been photographing wildlife for many years, but this is his first international award for his work.

The Elephant Bunker was opened earlier in 2013 and is constructed from re-enforced concrete with a 23m tunnel taking clients safely and quietly to a hide at the end which itself is positioned a couple of meters away from a very busy water hole.

Anyone who knows the Chobe knows that it is famous for its huge elephant population and this waterhole is a particular favourite of several large herds. It is not uncommon for there to be in excess of 100 animals at a time, especially in the dry season when Oom Louw (Senyati’s owner) pumps fresh water in to give the desperate animals some respite from the bone dry savannah. Even from the raised bar it is a sight to behold so you can imagine what it looks like when you are right at the feet of these magnificent beasts looking upwards as they jostle for position.

The hide takes eight clients, each with their own height-adjustable seat. Each client has a window at ground level from which to get some of the most fascinating shots. 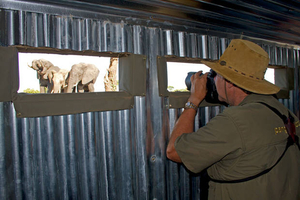 The Pangolin Elephant Bunker in Chobe

The Elephant Bunker is for the exclusive use of Pangolin Photo Safaris’ clients and is open from 4pm until late.The waterhole is floodlit and we often see nocturnal action along its edges after sunset. Lion, leopard, hyena, jackal and the odd honey badger are all in the area.

Visit www.pangolinphoto.com/bunker to find out more. 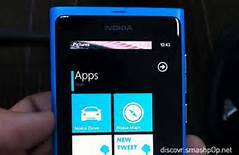