Here is a brief story of a persons experience at Elephant Sands.

A family of elephants slink over to the water trough, unfazed by the dozens of diners staring in disbelief nearby.

A large male with wrinkled skin sucks water from an above-ground pipe leading into the muddy trough.

Another elephant, smaller, blows bubbles. Water spills onto the ground.

“See what I mean? This is so special,” says Barry Venter, a safari guide at Elephant Sands, a bush lodge in Botswana.

The elephant family, including two juveniles and a baby, are six metres away.

The baby weaves in between the legs of a parent but keeps its distance, protected by ma or pa’s trunk.

It’s dark, except for a glow coming from the bar and dining area. Black beetles buzz about. Tourists spray insect repellent over exposed limbs, and watch on, mesmerised.

Eventually, bellies full, the elephants wander back into the darkness surrounding the camp. 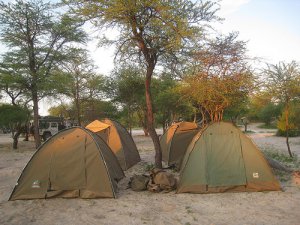 Later in the night, after travellers have retired to their dome tents, the guttural sounds of elephants are heard. Their heavy breathing and grunting permeates through the thin nylon walls “protecting” you from the African night.

One would assume sleeping among elephants would instil fear, that it would be hard to count sheep – or springbok. But it’s oddly comforting.

Your surrounds are peaceful and you realise you’re experiencing a rare moment in which you’re truly in touch with nature.

During Botswana’s rainy season (October-April) there is water in all of the drinking holes around Elephant Sands, a lodge set on a 16,000-hectare unfenced private conservancy.

That means animals are not drawn to the water trough in front of the bar as often as they are during the dry season (May-October).

When the clouds are kept at bay, the trough, and the water hole behind it, are kept full by staff. It results in a plethora of creatures, including leopards, converging here.

The dry season is also the time of year when elephants frequently stroll between tourists’ tents, and around parked vehicles and toilet blocks, to reach the only reliable water source.

You learn more about the 95,000-odd resident and migrating elephants in the area when you join a game drive across the property.

Game drives also give visitors a chance to see buffaloes, lions, giraffes, wild dogs, hyenas, and antelopes such as steenbok and kudu.

It’s obvious though, that Botswana is elephant country, something that becomes especially apparent when you first make your way to Elephant Sands, 240km from Francistown. 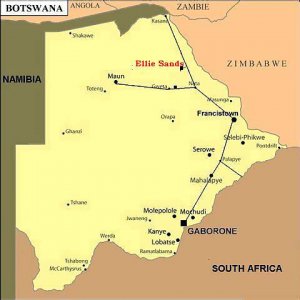 Road signs alongside “Elephant Highway” do not warn of people crossing, trucks slowing, and definitely not kangaroos bounding. They feature elephants, telling drivers to beware of the real risk of one stepping out in front of a vehicle.

It’s this open space and lack of fences that make a trip to Elephant Sands, and Botswana in general, so special. Africa’s animals are free to roam. And what better way to encounter them.

They are ideally located in the centre of Botswana’s highlights, such as: the Makgadikgadi pans, the Okavango delta and Chobe National Park. Victoria Falls and Hwange National Park are on their doorstep so to speak.

The lodge is a great starting point for a tour along all these places of interest.

Next post Australia A take home victory against Zimbabwe