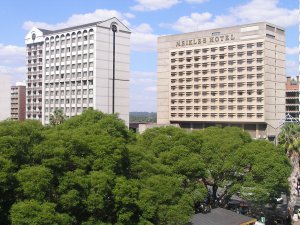 The Zimbabwe Stock Exchange (ZSE) listed firm, Meikles Hospitality says its renovation of the North Wing is expected to be completed by August this year. The US$8,5 million project has been under way since the middle of 2012 and will see a significant refashioning of the entire wing.

The hospitality group, which embarked on the sprucing up of its main hotel in Harare April 2012 ,says the upgrading of the property is 90 percent complete with the refurbished rooms set to be operational by August.

The project involves the complete renovation of all suites and bedrooms in the wing, including major changes to their bathrooms. Function rooms on the ground and second floors of the wing are also being redesigned, while the hotel’s flagship restaurant, La Fontaine Grill room, is being extensively refurbished and its kitchen completely transformed into one of the most modern in Southern Africa.

Meikles Hospitality Managing Director, Karl Snater said the upgrading of the property is expected to enhance the competitiveness of the hospitality group and is in line with local tourism industry objective of improving quality of products and services.

A whole new look – with a unique African theme – has been adopted and when the wing is operational again, guests will delight in both its luxury and comfort, as well as its exciting new style and design.

Most of the country’s hoteliers embarked on upgrading of their facilities ahead of the forthcoming United Nations World Tourism Organisation (UNWTO) General Assembly scheduled for August this year.

Market analysts say there is need for the local tourism industry, which has been on a growth path over the past few years, to inject more capital in the uplifting of their facilities to meet international best practices.

Next post The Spirit of the Great Heart Challenge: The Mzanzi Trophy

Qatar Airways to fly to Lusaka and Windhoek direct.