The Zambezi’s link to a lineage of ancestral spirits

Many visitors come to see whitish curtains of water falling down into a splashing chasm down into a deep gorge and again tumbling upwards and downwards as the Zambezi River snakes down on its final journey to the Indian Ocean. Jungle habitants, the graceful duikers, wild pigs and shaggy waterbuck, appear and disappear in the rainforest. The place popularly known as the rainforest has the story to tell.

It is in this place where the baTonga and Nambya tribes had (and still have) an emotional attachment with their river God. They believe the waterfalls, now known the world over as the Victoria Falls, have a link with a lineage of their ancestral spirits.

Tourists from all over the world have descended on the Victoria Falls, through a marketing stunt pulled by colonial explorer David Livingstone, who internationalized the falls by naming them after Queen Victoria of England.

An elderly man, Mr Philip Siansundu from Binga, confirmed that the Zambezi River has a spiritual significance to the baTonga people.

“The Zambezi River is of paramount importance to the baTonga. Besides being a source of livelihood, our ancestors lived in this place.

“When our forefathers came to this place and heard the roaring water they would know the ancestors were speaking to them. They would shiver and bow down their heads in respect, whenever they got close to the sound of the roar,” he said. 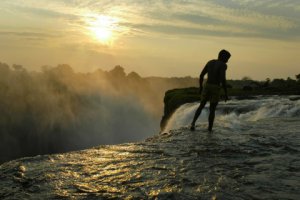 Man swimming at the top of Victoria Falls

“As we speak, a number of people come from faraway places, just to take a bath in the Zambezi River as it believed the water cleanses and brings good luck,” he said.

Mrs Margaret Ndiweni says her family believes that the waters from the Zambezi cleanse evil spirits, hence every year end she uses the waters fetched from the falls to sprinkle her homestead.

However, sacred religious respect was accorded by the Tonga to the Zambezi River.

Historically during David Livingstone’s visit to the Victoria Falls, he recorded three different spots at the falls that were used by Tonga chiefs.

On the spots where the baTonga and ba- Nambya appeased their ancestors, 70 large elephants tusks were stuck in the ground, and ringfenced with concoctions of traditional medicine.

“So much care was put on the graves of the forefathers whose spirits guard the water of the Zambezi River, because the Tonga people believed that the souls of their ancestors had continued existing in the waters,” said Mr Thobela Njovu

However, the Nambya also attached ritual significance to the Zambezi River although most of them were related to rainmaking ceremonies.

Mr Emmanuel Tshuma, a custodian of the Nambya culture, said the Zambezi River also tells a story in their cultural norms and beliefs.

“Our rainmaking ceremonies were done along the Zambezi River and the islands which are a product of the meandering Zambezi River,” he said.

He said traditional beer would be brewed and spilt into the river to appease the ancestors in the river.

He said although the water source was also used as a crossing area to some of the nearby areas over the river, the river was mainly used for cleansing evil spirits.

The Nambya occupy the swathe of land between Hwange Town and Zambezi River and share part of the land with the Tonga. They both share the Zambezi as the vein that carries the blood of their lives.

The Tonga believed that there was a river spirit in the Zambezi called the Nyaminyami.

Nyaminyami: Believed to be half fish, half snake

In the belief, Nyaminyami controlled life in the Zambezi and that anyone hampering with the natural flow of the water would be punished. It was believed that the construction of the Kariba Dam infuriated the Nyaminyami, the harsh river God, and hence they credit it with having attempted to destroy Kariba Dam twice during the record floods of 1957 and 1958.

Although the Zambezi River is one of the major tourist attractions in Zimbabwe which attracts divers, boat cruises and various water rides, it still remains as one of the existing ancestral attachments of the Tonga and Nambya. In their indigenous language, the river is called Kasambabezi. 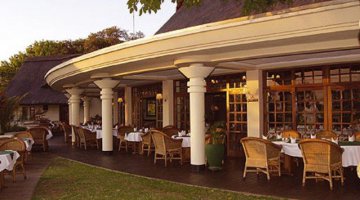 Zimbabwe: Ilala Lodge, spruced up and ready for UNWTO