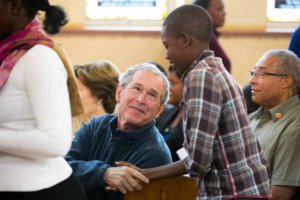 Mosi-Oa-Tunya National Park, Zambia — the mist is visible from miles away, making it seem as if a massive wildfire somehow has sprung from the plummeting cascades of Victoria Falls.

But the waterfall itself — a few miles from Livingstone, Zambia’s tourism capital — is hidden from view until visitors are directly in front of the massive wall of water. That mystery is part of the allure for what the locals call Mosi-Oa-Tunya, “the smoke that thunders.”

To experience it, one must be there, soaking wet from the spray. Victoria Falls is spectacular enough to impress a man whose position has allowed him to see many of the world’s wonders.

Bush and his wife, Laura, are in Livingstone to refurbish a health clinic as part of their cancer-fighting initiative, Pink Ribbon Red Ribbon. The Mosi-Oa-Tunya Health Center, named for the falls, was chosen as a spot where the project would have a large impact.

“I want to encourage all the women in the country to go for cervical cancer screening because cervical cancer lesions are easy to treat when detected early,” Mrs Bush said.

Mrs Bush also called on the media to educate women on the need to go for cervical cancer screening, adding that education was the key to reducing the disease.

So far, about 40,000 women in Zambia have been screened and tested for cervical cancer under the Red Ribbon Campaign which is spearheaded by First Lady, Christine Kaseba-Sata.

Bush joked Sunday that the site was picked in part because he had never seen the waterfall, which Scottish explorer David Livingstone famously named for the queen of England.

Bush, his wife and most of his team toured Victoria Falls on Saturday, surprising some unsuspecting American tourists. A few others participating in the clinic renovation visited Sunday morning, just as the sun started to rise.

All were amazed by a natural treasure that produces a downpour one moment, a set of rainbows the next and stunning views at all times.

The impact of Victoria Falls tourism is hard to ignore in Livingstone.

Hotels are a bit nicer here. Tourist activities abound, including helicopter rides, safaris and bungee jumping. The favored local beer is called Mosi and features a drawing of the waterfall.

Some Victoria Falls experiences defy all logic, and that includes the Devil’s Pool next to Livingstone Island. The swimming hole is right above the falls, allowing daring tourists to swim to the edge and tempt their fate by leaning over.

Ponchos are sold at the trailhead of the Mosi-Oa-Tunya National Park to avoid getting completely drenched.

Victoria Falls — 360 feet tall at its highest — is protected by a curtain of steep rock walls that force the spray into the sky and make it difficult to see the entire cascades at one time. The first overlook gives one of the park’s clearer views, which included a double rainbow Sunday.

A slick stone path clings to the cliff’s edge, sometimes without a railing. Viewing points pop up along the way. But the biggest thrill comes from crossing the Knife Edge Bridge, which allows a vertigo-inducing look straight down to the bottom.

More than any adrenaline rush, though, is the calm that results from the cool mist and constant roar of falling water. An American embassy official, in town from Lusaka to help out on the clinic, described his visit as “spiritual.” 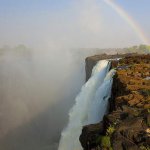 “You probably take it for granted, since you live here,” Bush said. “You shouldn’t.” Mr Bush also said he was pleased to be in the country which was peaceful and beautiful with kind people, adding that the country was privileged to have the Victoria Falls which he described as unique and spectacular. 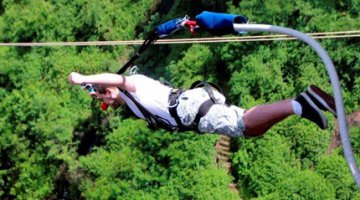 Update from the Bridge