The Civil Aviation Authority of Zimbabwe has commenced the refurbishment of the Victoria Falls International Airport to boost capacity ahead of the United Nations World Tourism Authority General Assembly to be held in the resort town in August. Victoria Falls International Airport manager Mr Ronnie Masawi said they were extending the airport’s VIP Lounge to cater for the increased VIP traffic during the UNWTO conference.

“The extension of the VIP Lounge towards the airside has since begun.

“This project is aimed at increasing the VIP Lounge’s accommodation area to cater for the huge number of delegates who are expected for the UNWTO General Assembly,” he said.

The Victoria Falls International Airport is also undertaking a number of soft refurbishments such as the setting up of motion-sensor doors and remote air-conditioning for the terminal building to improve its ambience ahead of the mega-tourism event.

Mr Masawi, however, said these projects for the UNWTO event were independent of the airport’s broader expansion project.

The larger project, which includes the construction of a new 4 000 metre runway and a new international terminal building designed to handle 1,2 million passengers per annum, rehabilitation of the car park and the current runway is well on course, estimated to cost 1.25 billion Yuan (US$202 million), has financed a loan from the Export-Import Bank of China.

“The refurbishment of the land side, that is, the widening of the airport road to Victoria Falls Town should be completed by December 31, 2014, while the construction of the new runway is expected to be complete by April 2015.”

David Chawota, chief executive of Civil Aviation Authority of Zimbabwe says, after completion, the airport’s runway would be able to accommodate wide-body aircraft like BOEING B747-400s and Airbus A340s.

The long-term project is not expected to experience any financial constraints since the money has already been availed.

Victoria Falls, on the Zambezi River at the border of Zimbabwe and Zambia, is one of the world’s largest and most spectacular waterfalls. Referred to as “the cloud that thunders” by locals, the waterfall is also a major tourist attraction in southern Africa.

The government of Zimbabwe expects tourism to become a booster of its economy, now largely sustained by mining and agriculture. Zimbabwe and Zambia will co-host the United Nations World Tourism Organization (UNWTO) summit this August at Victoria Falls. Organizers say it will be a rare chance to showcase African tourism.

Next post Hilton Hotel Harare due to begin construction in October 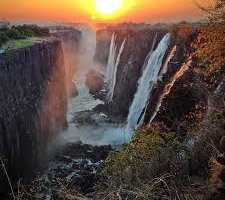