“Are there Crocodiles in the Zambezi River” 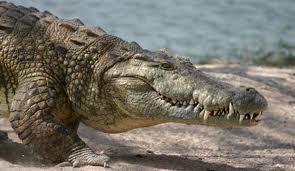 The other day I was sitting with some clients having breakfast at the Royal Livingstone. I enjoy my work in general but one of the great pleasures I have is the opportunity it provides me to sample the “good life” by staying some of my time in luxurious places such as this Hotel and others including the many amazing Bush camps and Safari lodges in the region. The view from the breakfast veranda at Royal looks out across a verdant green lawn and onto the swirling waters of the Zambezi as the river gathers itself for its one hundred meter vertical drop over the Falls. The Hotel is situated just 800 metres upstream of the Victoria Falls.

On this particular day, being mid winter in Southern Africa, which many may immediately assume from their own winter experiences elsewhere in the world, would involve jackets and wellies, the sun was shining, the sky completely clear and there was a slight chill in the air, but not a breath of wind, making for a combined in the sun temperature of 18 degrees centigrade at 0900 hours.

One of my fellow breakfasters a client from the Cape in South Africa was luxuriating in the weather and the breakfast and he asked “are there crocodiles in this part of the river?”

My reply was somewhat delayed as I looked out across this incredible view and thought that such a sight should not be dampened with the thoughts of blood thirsty creatures lurking below the surface. Then reality prevailed, it is dangerous to assume that something just from its look is so welcoming and safe. I told the young man that “yes there is probably a crocodile for every 100 metres of shoreline” and that is a conservative estimate. 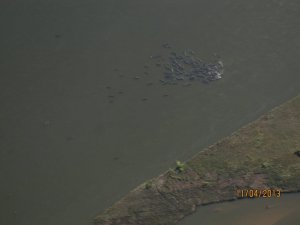 On returning to the less attractive past time of office work one of my fellow sufferers sent me a picture that had been taken only a month before by his Uncle who was enjoying a flight over the Lower Zambezi section of the river. The picture shows a dead animal in the river that looks like it is surrounded by more than a few crocodiles.

So next time you think that the waters of the Zambezi or any other wild river looks inviting, just remember this picture.