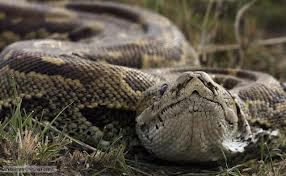 A Zambian truck driver was forced to kick, bite and stab his way from the clutches of a giant python.

Kelvin Katoka, 25, unknowingly ran into the giant snake, while driving his excavator in the bush at a copper mine in north western Zambia.

“Within no time, the python was all over my body and it then threw me on the ground,” he said from his hospital bed, where he has been recovering for nearly a month.

Rock pythons are Africa’s largest snake and can grow up to 23 feet long. They have been known to kill and swallow whole antelope, wildebeest and even crocodiles.

Attacks on humans are rare.

Mr. Katoka managed to bite the python as it coiled around him and held on in a “long struggle”.

“It then clicked to my mind that I had a small knife in my work suit pocket and quickly, I rushed for it,” he recalled.

“I stabbed it in the sides of its body and slowly it started loosening itself but by then, I had become weak.”

The snake once again wrapped itself around his body and “started to apply saliva all over my face in readiness to swallow me,” he said.

“I started vomiting blood and I lost vision of what was happening and that was how I became unconscious,” he said.

“It then coiled itself round my body to the extent that people could not see anything else apart from the python itself.”

Two workmates luckily came to where he had been working in Mwininlunga, 520 miles North West of Lusaka. 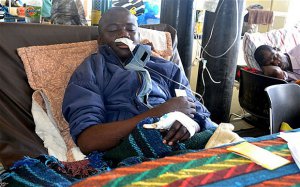 Kelvin Katoka in his hospital bed at the Kitwe Central Hospital

They killed the python, carried Mr. Katoka away and took him to hospital.

“From the day I was attacked, I have known that my life will never be the same. I have pain in the ribs and I am very weak.”

“I am lucky to be alive, it’s by the grace of the Lord, and I thought I was gone.”

The death knell for tour operators?