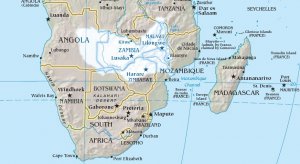 Climate and human pressure on resources are significantly changing the environment in the Zambezi river basin, as illustrated in a new 2012 publication, the Zambezi River Basin Atlas of the Changing Environment.

The Atlas presents the wide range of water resources and other natural resources in the Zambezi basin, and their significance, as well as socio-economic and cultural aspects.

However, the satellite images show that the basin has undergone major environmental changes in the past 20 years.

These include land degradation, loss of forests, and expansion of urban and mining areas as well as the spread of alien plant species.

Zambezi River Basin Atlas of the Changing Environment, the first of its kind in the basin and southern Africa, is a collaborative initiative with the objective of providing scientific evidence about changes that are taking place in the natural resources and the environment.

The atlas was produced for the Southern African Development Community (SADC) Water Division, the Interim Secretariat of the Zambezi Watercourse Commission (ZAMCOM), and Zambezi River Basin stakeholders, by the Southern African Research and Documentation Centre (SARDC) through its environment institute, the Musokotwane Environment Resource Centre for Southern Africa (IMERCSA) and GRID-Arendal, both collaborating centers of the United Nations Environment Programme (UNEP).

The Atlas supports initiatives of the African Ministerial Conference on the Environment (AMCEN) such as the Africa Atlas of Our Changing Environment and the Africa Water Atlas.

According to the Atlas, the population of the basin in 1998 was 31.7 million compared to an estimated 40 million in 2008, with 7.5 million people living in urban centers. Most countries in the basin are urbanizing rapidly, putting pressure on finite resources.

The Atlas illustrates the deforestation of large areas surrounding Lilongwe in Malawi, among others, due to the high demand for firewood and land for farming by the growing population.

The Atlas shows mining as a major economic activity in the basin and satellite images reveal striking land-use changes as a result of mining activities, notably in Zambia.

The revival of copper mining at Kanshanshi and Lumwana mines in Solwezi in north-western Zambia has led to a population influx, resulting in the rapid but haphazard expansion of the town. As a result, surrounding forested areas have been cleared for firewood and peri-urban farming.

Sub-basins such as the Luangwa River, Lake Kariba, and the Kafue and Kabompo rivers have high concentrations of mining operations, contributing to water pollution in the Zambezi River.

In addition, highly urbanized sub-basins such as the Kafue and Manyame are discharging waste into the Zambezi river system.

The Atlas shows that industrial activities that general significant amounts of waste are of concern. About 1,400 tons of waste is produced daily in the Zambian capital, Lusaka, with only 10 percent collected by the municipality.

The Atlas shows that Zimbabwe, Zambia and Malawi together have 86 percent of the estimated 5.2 million hectares of the land area that is cultivated annually in the basin and that the use of fertilizers and agrochemicals are contributing to the growth of harmful aquatic plants in water bodies.

An unusual phenomenon is seen on the Savute River in Botswana, which was uncharacteristically dry for long periods but is now flowing, while Lake Liambezi in the Caprivi region of Namibia, which almost disappeared between 1985 and 2000, has also begun filling up.

Although water hyacinth growth is a problem throughout the basin, areas that are particularly affected are the Kafue Flats in Zambia, Lower Shire in Malawi, Lake Kariba between Zambia and Zimbabwe, and Lake Chivero in Zimbabwe where the Atlas provides satellite imagery of a 25-year battle against the invasive weed. 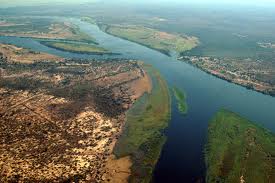 Despite the abundance of wildlife resources in the basin, the Atlas shows that there are pressures that are threatening the existence of animal species.

Species that have become extinct in the basin in recent years include the blue wildebeest in Malawi, the Tsetsebe in Mozambique, and the Kob in Tanzania.

The Atlas also highlights several trans boundary initiatives in various sectors that include those for wildlife, transport, water and energy.

For example, the basin contains the second deepest lake in Africa (third deepest in the world), which has different names in Malawi, Mozambique and Tanzania — Lake Malawi/Niassa/Nyasa/ – and two huge artificial lakes created by the construction of major hydroelectric dams at Cahora Bassa in Mozambique and Kariba, managed by Zambia and Zimbabwe.

These two dams provide the bulk of the basin’s hydropower, together with the Kafue Gorge dam in Zambia.

Six vast Trans Frontier Conservation Areas (TFCA), have been established in various parts of the basin to coordinate management of wildlife and other resources, including the Kavango-Zambezi (KAZA) TFCA that covers 287,000 square kilometers over five countries (Angola, Botswana, Namibia, Zimbabwe and Zambia) and is the largest TFCA in the world.

The Atlas concludes with a chapter outlining the various institutional arrangements and policy frameworks put in place to address the challenges in the Zambezi River basin.