“There was a terrible, sulphurous smell, like rotten eggs, and a tremendous pressure against my chest,” Paul Templer said, recalling the moment when he realized he was in the mouth of a hippopotamus. 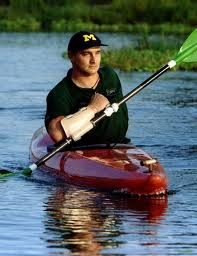 At the time, Templer was 27, a river guide taking groups of tourists down the Zambezi River near Victoria Falls, along the border of Zambia and Zimbabwe.

His near-death story appeared in The Guardian’s “Experience” series on Friday and has since grabbed headlines around the world.

Templer, now living in Michigan, wrote in The Guardian that he knew the hippo – his attempted murderer – as a “grouchy old two-ton bull” that lurked in the stretch of river the tours traversed.

Hippos are a common sight above the falls, according to PBS. The massive mammals, which can weigh up to 8,000 pounds, can spend the majority of the daylight hours submerged to keep cool, reports National Geographic. Fast sprinters and strong swimmers, they can also hold their breath for several minutes, as Templer found out on that March day in 1996.

“I remember looking up through 10 feet of water at the green and yellow light playing on the surface, and wondering which of us could hold his breath the longest,” he wrote in The Guardian. “Blood rose from my body in clouds, and a sense of resignation overwhelmed me. I’ve no idea how long we stayed under – time passes very slowly when you’re in a hippo’s mouth.”

The hippo’s teeth savaged Templer’s chest and left arm. But he told The Chicago Tribune in an earlier interview that he still counts himself very lucky. 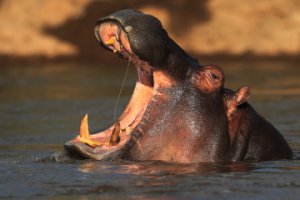 “I went straight down his throat. It smelled like death,” Templer said in the Tribune. And yet, when the hippo “bit into my lungs he missed my heart. He missed my liver and kidneys.”

Although Templer carried a .357-caliber Magnum firearm, he told the Tribune he never got a chance to pull it. After repeated bites, Templer managed to get ashore, but his wounds included a bite so deep it revealed part of his lung.

“Out there in the wild, we were the intruders,” Templer explains in a YouTube video titled “A Bad Day at the Office,” which recounts the harrowing event.

In the immediate aftermath of the attack, his left arm crushed and stripped of flesh, Templer recalls a strange feeling of calm come over him.

“All the pain went away and I knew that it was my moment of choice,” he says in the video. “I could shut my eyes, I could drift off, I could call it a day, or I could fight my way through this and I could stick around… The pain was so intense I thought for sure I was going to die. And then when I didn’t, there were moments that I wished that I would, just to escape that excruciating agony.”

Hours of surgery later, Templer survived. He went on to a successful career as a motivational speaker, author and founder of a charitable foundation supporting disabled and terminally ill children in Michigan and southern Africa.

While Templer got away from his attacker, thousands of others have been less fortunate. According to Discovery, hippos are considered the deadliest animal in Africa.

Every year, unfortunate tourists and even beauty queens are reported mauled or killed by hippos. In 2011, a particularly tragic incident involved 40-year-old farmer who was killed in South Africa by a 5-year-old hippo he had rescued and tried to domesticate.