In recent years there have been some outstanding discoveries of dinosaur remains in Zimbabwe.  While very ancient rocks predating life on our planet underlie most of the country, there are several areas of more recent geology suited to preserving such remains. These occur largely around the margins of Zimbabwe – the Zambezi, Save and Limpopo valleys and the west of the country stretching from Nyamandhlovu in the south to Robins Camp (Hwange National Park) in the north.

The Zambezi Valley has proved particularly rich and a current international research project is investigating several accumulations of dinosaur bones from the Mana Pools area. This note is however not about old bones but the exciting discoveries of old footprints left in the once soft sediments by these same lumbering beasts.

In Zimbabwe dinosaur footprints were first reported in 1972 from Nyamandhlovu just west of Bulawayo. Unfortunately they were fragmented blocks lifted by a farmer in 1915 to pave around his homestead. They are in red sandstone and date to about 220 million years ago. The tracks are fairly small, showing three toes and claws.

They are thought to be from one of the smaller dinosaurs, Syntarsus rhodesiensis. This was a carnivorous beast that walked upright, somewhat like a modern kangaroo. A good 3D image of these creatures can be seen at the Natural History Museum in Bulawayo.

For some years there have been stories of other, larger footprints in the Zambezi Valley around Mana Pools and Chewore. In 1984 the first of several trackways was discovered in the Ntumbe area. Since then several other sets of tracks have been located, some of which extend over a long distance and have international significance given the story that they can tell. 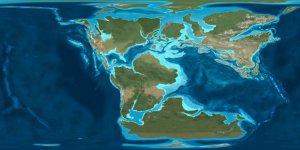 The Ntumbe footprints date to somewhere between 145 to 170 million years ago. They were formed in shallow-water deposits that may have formed periodically as a pan or next to a river in what was otherwise a fairly dry environment. At the time this part of Zimbabwe was in the desert-like interior of the ancient Supercontinent of Gondwanaland that was already being to break up into its modern continents. 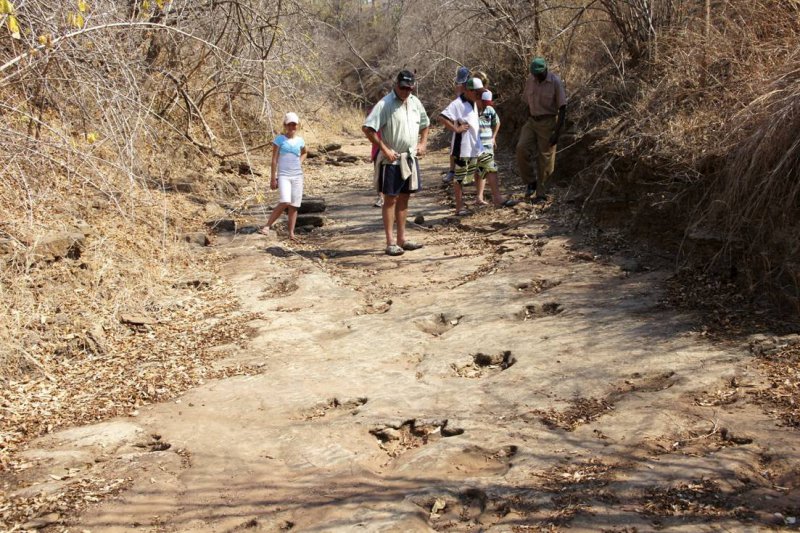 To date current riverbeds expose the tracks of at least 94 dinosaurs which have been located. Some of them go over a considerable distance before being lost to sight in adjacent river cliffs. All seem to be heading in one direction, possibly towards water or food. 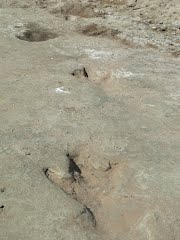 Of particular and international significance is the co-presence of two distinct species. This is the first place where this has been conclusively shown and proves the long-held assumption of predatory behaviour. There are the massive and round sauropod plods left behind by one of the huge, heavy and long-necked herbivorous dinosaurs. The bones of several possible species have been located in the Valley but as to which exactly left the track we are not sure. They were possibly made by a species of brachiosaurus, fossil bones of which have been found 50km away in Dande.

Associated with these are multiple tracks of a theropod dinosaur; a carnivore that hunted in packs. Their tracks are huge, three-toed and clawed tracks of a killer. The evidence shows several individuals, the pausing and criss-cross nature of the tracks suggest group activity – communal hunting behaviour. What precisely they were we are not yet sure, but research on other bone accumulation sites nearby may hold the key.

While such theropod behaviour has been found elsewhere in the world, this is the first such discovered association that links the hunter and the hunted. This proves a long held assumption of predation.

These tracks lie in a remote part of Zimbabwe and are rarely visited by the tourist. However the potential is there for other sites to be located elsewhere where the geology is suitable. It is a matter of looking.

For more information go to www.naturalhistorymuseumzimbabwe.com

Rob is probably best known as an archaeologist, formerly curator at Great Zimbabwe and later the Zimbabwe Museum of Human Sciences, teacher, mentor and University lecturer.

He holds several first class degrees from the University of the Witwatersrand, South Africa.Robs expertise is in cultural heritage and landscapes. He has worked with the National Museums & Monuments of Zimbabwe for many years, and in 2004 drafted plans to structure their heritage impact assessment unit. He is again involved as an Associate Researcher and is looking at several projects including Khami and Matobo Hills World Heritage Sites, the Natural History Museum of Zimbabwe (Bulawayo) and various urban heritage initiatives.

He has been involved in impact work and field assessment since graduation and has worked in South Africa, Lesotho, Botswana, Zambia and Zimbabwe.His project work has involved a wide range of assessments as well as public presentation, community projects and ecotourism. He has taught at several leading Zimbabwean senior schools as well as lecturing at the University of Zimbabwe.

Rob was active in the Geographical Association of Zimbabwe as editor, chairman and conference co-coordinator and is a member of the Association of Southern African Professional Archaeologists (ASAPA).

Rob has consulted for several leading NGOs and companies including the Peace Parks Foundation, the World Bank and various big mining houses. He consults regularly for many Harare-based embassies.

He has published widely and in addition to his formal fields, has considerable understanding of historical matters, ethnobotany and in the field of essential oils. He is also involved in several forestry-related and ecotourism projects in Zambia and Zimbabwe and currently lives near Bulawayo in southern Zimbabwe. 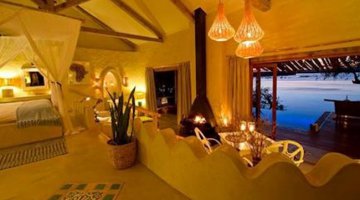