In March, life was looking rather bleak for Victor, the Cape pangolin. 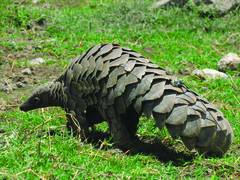 He had been captured from the wild by a poacher and was being kept in a box while his captor searched Walvis Bay for a buyer. Luckily, a member of the public heard about this illegal plan and alerted the authorities to it.

The Ministry of Environment and Tourism was informed about the operation and set up a sting operation.

On 28 March, the seller was arrested as he attempted to sell Victor to an undercover police officer. While his captor was awaiting his chance to apply for bail, Victor was transferred to the Mundulea Pangolin Research Project, located south of Otavi.

The next evening, Victor was fitted with a radio transmitter and released into the nature reserve. Since then, researchers have been tracking Victor to study how he is acclimatising to his new home. Researchers at Mundulea hope that the data collected from Victor’s release will benefit future pangolin rescues worldwide and will also contribute to an estimate of Namibia’s pangolin population levels.

Currently, very little is known about pangolin life history and Victor will have an invaluable future as a research pangolin.

So far, Victor has been doing very well, settling in a territory about 2 km from where he was released and feeding successfully on his own.

“Victor is very lucky, not only that he was rescued, but also that he was found in such good condition,” said Mundulea’s project leader Bruno Nebe.

“Many pangolins that are rescued from poachers are either severely dehydrated or physically injured from poachers clipping and even pulling out their scales,” Nebe said.

Studies in Namibia and South Africa have shown that released pangolins have a high mortality rate, especially if they are not completely healthy when released.

“We released a pangolin about a year ago. Many of his scales were shattered and cut off from where poachers had either tried to remove his scales or damaged them getting the animal out of a hole,” Nebe said.

“There was nothing we could do for the pangolin, other than to disinfect his worm ridden wounds. Unfortunately, we found him dead a week later. As the animal was weak and injured from his capture ordeal, a honey badger had been able to get through his damaged scales and killed him.”

Pangolins are usually captured for their scales or for their meat, both of which have traditional uses for some people in Namibia. 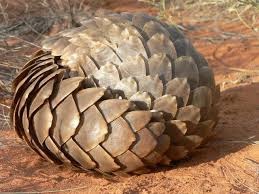 Pangolin curled up in a ball

Once captured, the pangolin is either killed immediately to be eaten or kept alive while its scales are slowly harvested. The pangolin’s scales, which are thought to have medicinal powers, are cut off of or even pulled out of a living pangolin and then sold to people believing in their potency.“Many of the pangolins that we have rescued and released had damage to their scales,” Nebe related.

For many pangolins, their fate is sealed the moment they are spotted by poachers as pangolins are completely harmless and will remain curled up in one spot instead of trying to escape. Once in captivity, most pangolins will be turned into meals, medicine for their captors or sold.

Even when they are lucky enough to escape or be rescued, pangolins are often left too injured or malnourished from their time in captivity to survive in the wild.

“We are now looking at new ways to improve the survival chances of a released pangolin by feeding the animals a special high protein diet and rehydrating them as soon as possible after receiving them,” said Nebe.

As pangolins feed exclusively on ants and termites, it is virtually impossible to keep them in captivity. Even in zoos, pangolins quickly die when they are not fed their natural diet.

“The best we can do for these animals is to release them as soon as they are in a stable condition,” Nebe further explains. “No porridge, vegetables or other dog food will do.”

The Mundulea Pangolin Project was established four years ago and since then we have been working with these very interesting and elusive animals, said Nebe.

“We work together with the Ministry of Environment and are supported by Liz Komen from NARRAC. She has rescued pangolins for years now and has built up an important database that can help us increase our success in releasing confiscated animals.”

Pangolins are listed as a protected species in Namibia under the Nature Conservation Ordinance of 1975. As such, it is illegal to catch, kill or possess pangolins or their scales.

Unfortunately, the demand for pangolins and their scales is on the rise in Namibia. This is due to Namibia’s ever increasing population as well as to the encroachment of the Asian pangolin trade into Africa.

The high number of pangolin poaching throughout Namibia has caused pangolins to all but disappear from areas where they were once commonly found.

A recent survey found that many Namibians, especially those living in the Northern provinces, have not seen a pangolin in several decades. 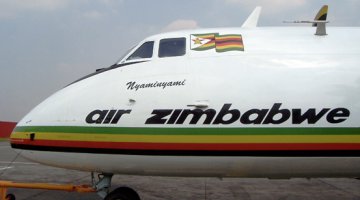