We have recently been informed of an elephant attack in Botswana, where the elephant left a young man with broken limbs in the Plateau area of Kasane. 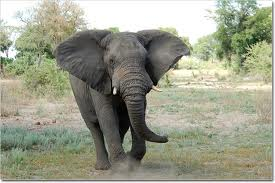 Kasane is a town in Botswana, close to Africa’s ‘Four Corners’, where four countries almost meet: Botswana, Namibia, Zambia and Zimbabwe. It has a population of approximately 10000 people and lies on the south bank of the 300 meter wide Chobe River. It also borders the Chobe National Park which is famous for its elephants. The latest enquiry into the elephant population estimates it to be 71,000 – the highest elephant concentration in Africa and the largest continuous surviving elephant population on Earth.

In areas such as this where human populations live side by side with wildlife, there is often human animal conflict and with this in mind VictoriaFalls24  turned to Grant Nel, a well-known, professional safari guide in the region of Kasane, for his opinion of what happened. His comment is as follows:

“Firstly no-one was killed in this specific incident, which is important!

The individual who was seriously injured in KASANE and is now recovering in Mahalapye was walking to work in the morning along with numerous other people. He is unfortunately hard of hearing and did not hear his colleagues warning him about the elephant which he didn’t see. Consequently he practically walked onto the animal.

It is important to note that this was one individual animal that formed part of a group (I believe a young group of bachelors) and that people had been toing and froing to work as they do very day, mindful of the animals. It was a seriously unfortunate accident and no blame has been laid with the elephant, i.e. it has not been destroyed.

As far as human-wildlife conflict goes, yes we do have it, but Kasane/Kazungula is one of those unique destinations where we mostly live as part of the wilderness, not apart from it. The silent majority of Chobe residents, from all walks of life, have been living amicably with wildlife for generations. However a very vocal minority seem to be shining an unfavourable spotlight on the few incidents we do have which is, in my personal opinion, not a true reflection of the situation.

Just recently a conflict has arisen between two small agricultural businesses and the tourism sector in Kazungula. These arable farmers (small scale commercial) with inadequately protected crop lands slap bang in the middle of a recognised wildlife corridor have been predictably raided by elephants. Control has precipitated from scare tactics (bear bangers) to wounding of elephants with small and large calibre rifles, often necessitating their euthanisation. (NOTE: In Botswana it is currently legal to defend your crops, home and life from even a perceived threat from wildlife.)  Some members of the tourism sector have independently taken the stance of boycotting these vegetable growers because they are effectively destroying the very thing that tourists come to see. This has led to one particular farmer (the biggest culprit when it comes to wounding and killing elephants) going to the media stating that he is being unfairly treated by the tourism sector. Last week another individual, called in by this very farmer, was attempting to shoot an elephant in the crop lands. The elephant turned on the fellow, knocked him to the ground with non-life threatening injuries and destroyed the rifle. Who says elephants are dumb!

Chobe Farms has been operating as a private commercial enterprise since the mid 90’s and has very little conflict with elephant despite being alongside our busiest wildlife corridor. This begs the question… What are they doing that the other farmers aren’t. Answer is simple. Adequate protection of the crops and constant management of that protection.

Enviro911 currently concerns itself with illegal environmental practices; however we are constantly being drawn into the Problem Animal Control ‘bun fight’ and believe that current solutions are anything but. We are working closely with authorities to find what will work and are making headway. Our Department of Wildlife has stepped in and the farmers have been advised to stop their current tactics, so (literally) all is currently quiet in Kazungula”.

“Even the farmers’ business would not be doing well if this place was not so rich in elephants and wild animals,” says Nel.

He explained that his organisation mainly deals with illegal environmental issues such as poaching, but of late the human-wildlife conflict had taken priority. Nel said chasing elephants with rifles and firing gunshots was not solving any problem and he anticipated that things were going to get worse with drought expected in the region this year.

He called on farmers to adequately protect their farms against elephant invasion but some feel that they are doing enough, having electric fences around their farms and even going as far as trying out the chilli-pepper pilot project, which is said to keep elephants away. Even though it was still at pilot stage, some farmers have already dismissed it as “useless” as elephants still manage to make their way into the farms. Nel said in future when allocating land, wildlife corridors must be considered – “Farms should be allocated away from wildlife corridors and there is need for education on the importance of wildlife in this region,” he said and emphasised that commercial farmers and tourism enterprises must not infringe on each other’s business. 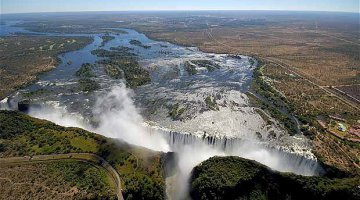