Following the Government’s realistic decision to reclassify the tourism sector from being a mere social sector to an economic one, there is increased need for intensified efforts to market little-known tourism products and services in all parts of Zambia.

With this responsibility falling squarely on the shoulders of the Zambia Tourism Board (ZTB), a perfectly devised mechanism of translating the Government’s desire of developing the tourism sector in Zambia has already been set in motion by the tourism body.

Through its strategic focus, which is part of the 2013 marketing plan, ZTB has rolled out well-tailored strategy for promoting tourism in Zambia by way of conducting media familiarisation trips involving journalists visiting little-known tourism products and services in the country.

This, according to ZTB public relations and media manager Caristo Chitamfya, is aimed at demonstrating that there is more to Zambia’s tourism beyond Livingstone and the ‘Mighty’ Livingstone Falls.

With the first media familiarisation trip covering Siavonga in what has been dubbed ‘Destination Siavonga’ turning out a huge success, ZTB followed up that with ‘Destination Copperbelt’ in the tourism body’s intensified quest to market little-known tourism products and services in the province.

Armed with reporting tools that included note books, pens, sound and video recording gadgets, journalists from the print and electronic, private and public, on April 5, set out on a three-day escapade to sample some of the tourism products and services lying in the vicinity of the mineral-rich Copperbelt Province.

The first point of stop for the delegation that was led by Mr Chitamfya was Nsobe Game Camp, which is in Ndola and perfectly located about 55 kilometres south of Ndola and 70 kilometres north of Kapiri-Mposhi.

Nsobe, which derives its name from the Sitatunga Antelope and is situated on 1,500 hectare of Miombo woodlands, has farming and tourism as its main activities, according to camp assistant manager Christabel Mutenge.

“In tourism, we have activities that include game viewing, swimming, canoeing, nature walks and bicycle bush ridding, among others,” Ms Mutenge said, adding that: “With 15 species of Antelopes, and Giraffes and Zebras, in addition to the excellent hospitality facilities we offer here that is coupled with nature conservation, it goes to show that Nsobe is the perfect place to be for one who wants to find something much closer to Zambia.”

Ms Mutenge said on good moments, about 900 tourists both foreign and local get to visit a week, making the place a hive of activities.

It is no wonder the game camp has managed to generate 186 jobs with 37 of employees directly attached to tourism.

From the 186 jobs created, it is evident that apart from being a tourist attraction, Nsobe Game Camp also has relatively good impact on the economy of the nation and that of the local community where a number of locals have been engaged including in positions of shareholding.

Bearing testimony to that is there is a Schuiter, an indigenous Zambian lady who left her formal job of a nurse to come and be a shareholder on the invitation of Nsobe Game Camp proprietors, Fiona and Mark Tomlinson.

“I don’t ever regret leaving formal employment because my coming here has come with benefits as you can see here I am a shareholder and this has empowered me,” Ms Schuiter said.

And as if creating employment for the locals is not enough, Nsobe Game Camp management, as Mr and Mrs Tomlinson said, had managed to construct a trust school just outside the camp meant to provide education to the children in the surrounding communities.

Mr Tomlinson said plans were underway to construct a university school to offer skills training in agriculture to Zambians.

With Nsobe Game Camp being but just the first tourism product sampled during the Destination Copper belt tour, the picture began to fast form that Copper belt was truly the land of abundance, as it was certainly clear that the province was enormously endowed with, not only the minerals but also potentially rich to become a tourist destination because of the various tourism prospects.

But to fully appreciate the historical and geographical aspect of some of these tourist attraction sites, one needed to first visit an information centre, and so the Copper belt Museum proved the perfect place for that.

Stocked with vital information related to the history of the economic, social and cultural aspect of the province, the journalists had every reason to visit the Museum.

Apart from the renowned Dag Hammarskjöld Heritage site and Lake Kashiba National Monument being the outstanding tourism prospects for Copperbelt, the Levy Mwanawasa Sports Stadium has come on board.

The magnificent state-of-the-art Levy Mwanawasa Sports Stadium may be viewed by many as being a mere football playing venue, but the economic benefits that come with the facility turns out to far outweigh the reason for the stadium serving as a place for playing and watching football.

Little wonder that in its bid to promote sports tourism, ZTB organised media familiarisation trip had Levy Mwanawasa Sports Stadium, as one of the sites to visit.

Mr Chitamfya was categorical in stating the important role sports facilities such as the Levy Mwanawasa Sports Stadium bring to the nation.

“Sports facilities will attract sporting communities in the region, nationally and around the world and when sports men come, most of them come in big numbers.

“For example, when you have an event such as the Africa cup and five or six teams decide to come a month or so to train from here before the tournament, they will have to use our airlines, hotels and lodge facilities and eat our food and that means money coming to the country’s economy,” Mr Chitafya said.

It is for this, he said, that it was in the best interest of the country that sports tourism was promoted through conferences and sports facilities.

After a tour of these tourism destinations, it was time to check on the hospitality providers as they offer tourism services that play a significant role in promoting tourism in Zambia.

Those toured included Sherbourne Guest House and Hotel and Moba Hotel in Kitwe, which are owned by indigenous Zambians.

Mr Chitamfya expressed happiness with the obtaining state of affairs for tourism on the Copper belt where participation of the local community was visible.

He said based on what had been seen during the tour, there was participation at different levels of the local community in domestic tourism.

Mr Chitamfya cited the impressive investments in the hospitality industry in Kitwe by Sherbourne Farms Limited proprietor Maureen Hight and MOBA Hotel which is being owned by another local person.

“We have seen that these are Zambians running the show and so the picture in terms of local participation in tourism is encouraging on the Copper belt,” Mr Chitafya said.

The ZTB public relations and media manager was equally impressed with how Copper belt was faring in terms of hotel accommodation, saying most of the hotels visited and people talked to said they were happy with what they had in the province.

Mr Chitamfya said the only help ZTB needed was in the area of heritage sites, which he said most of them in the province lacked supporting infrastructure and facilities such as roads to ensure connectivity.

“We have special sites like the Lake Kashiba in Mpongwe District which has a rich history but unfortunately, the road, especially at the end of the tarmac is in a deplorable state and that prevents tourists from visiting the site,” Mr Chitafya said.

He said the ZTB’s mandate was to market tourism products but in the absence of supporting infrastructure and connectivity, it becomes a challenge to achieve that.

Mr Chitamfya said the ZTB would, however, continue to highlight all tourism products not just on the Copper belt but countrywide with the hope that this would ignite interest in local and foreign investors.

Next post 10 reasons why Zimbabwe is a true luxury destination

Previous post New Chobe tented camp to open in May 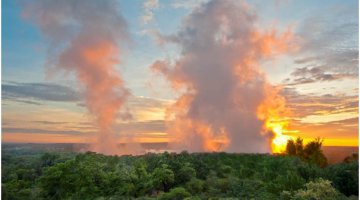 Common travel ailments and what to do about them