Crocodile attack on the Zambezi River near Victoria Falls 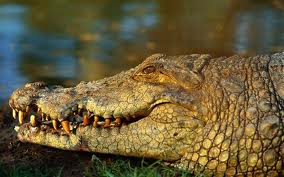 On Sunday 7th April, a member of staff from a Zimbabwean Safari camp lost his life on the Zambezi River 25km above Victoria Falls at approximately 4pm in the afternoon.

The young man had borrowed one of the camp boats (a canoe) and paddled across to the Zambian side of the river, it is not certain what he was looking to achieve on this trip. It is reported that the management of the camp who were based in Victoria Falls at the time of the incident, do not permit staff to use the boats for private use, even if there are no clients in the camp.

The incident was witnessed by a Zambian Safari Operator who gave the following statement:

The witness reacted instantaneously and took a boat to try and assist the victim.

The incident has been reported to both Zambian and Zimbabwean wildlife authorities who have been asked to work with the local crocodile farms in each of the respective countries, to capture the Man Eater, as this is not the first incident this crocodile is suspected to have been involved in. A recent case which involved a young boy was taken from the shore on the Zambian side some 30 days previously.

A comment from a river guide, who was approached by VF24.com, simply stated that:

One should remember that the Zambezi River is first and foremost a home to endemic wildlife and nature. The river has a large number of crocodiles and other wild animals as it has done for ever and these may pose a threat to humans under certain circumstances. Whilst there is local traffic on the river it is normally assumed that the local people who traverse the river, do so after some years of experience, consequently know the “does and don’ts”. In this particular case, I am not sure the young man had the necessary knowledge of the river.

In my experience the various tourism and safari companies that operate commercially on the river employ guides who are qualified and have many years’ experience on the river and so incidents involving tourists are minimal, in spite of the fact that every day there are at least two or three safaris that pass along this stretch of river.

2.       Make sure you are fully aware of the dangers of the river before embarking on any excursion

3.       Necessary permissions should be granted before embarking.