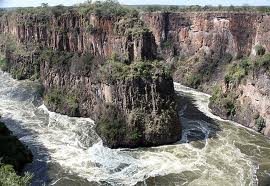 THE Zambezi River Authority has shortlisted six international investors for the construction of the 1 600-megawatt hydropower plant at the Batoka Gorge, a senior Government official has said.

“Initially, the authority shortlisted 26 international investors, but they have been whittled down to six,” Secretary for Energy and Power Development Mr Partson Mbiriri told delegates at the Zimbabwe-South Africa Investment and Trade Conference yesterday.

Mr Mbiriri said the contract would be awarded on a Build, Operate and Transfer basis, but gave no time- frame. He added that the World Bank had shown interest in the project and “we are working with them”.

ZRA, a statutory body jointly owned by Zimbabwe and Zambia and responsible for the Zambezi River, in December last year invited interest from companies or consortia with experience in developing hydro projects. The deadline for bids was February 8 this year.

Some studies have shown that the project may cost between US$2,8 billion and US$3 billion.

Once completed, the project would increase generation capacity and reduce reliance on electricity imports.

Initial studies have shown that the Batoka hydro scheme would turn Zimbabwe into a regional net exporter of power. The project would also improve the generation mix which is currently skewed in favour of coal-fired plants.

The Batoka hydro concept was conceived in 1972 out of a study instituted by the predecessor of Zambezi River Authority, the Central African Power Corporation. The study’s aim was to identify possible power sources which the inter-governmental institution could develop to meet Zimbabwe’s and Zambia’s power demands.

The Batoka hydro scheme is among Zimbabwe’s long-term plans to deal with the prevailing power deficit in the region.

There is also the Gokwe North project, with the potential to generate 1 400MW.

In the short to medium term, Zimbabwe is looking at increasing power generation at Kariba Hydropower Station and Hwange Thermal Power Station. Sino Hydro, a Chinese company, was contracted to undertake the expansion of Kariba Hydro at a cost of US$368 million.

The availability of power remains the biggest challenge to the economy, with negative effects on production and productivity across all sectors, including households.