The International Air Transport Association (IATA) has improved its global outlook – African carriers included – for the 2013 financial performance of the global airline industry primarily based on stronger revenues from increased passenger demand and growing cargo markets. Overall, IATA now expects airlines to produce a combined net post-tax profit margin of 1.6% (up from the previously forecast 1.3%) with a net post-tax profit of USD10.6 billion (up from the previously projected USD8.4 billion).
Speaking in Geneva, Switzerland, IATA’s Director General, Tony Tyler, did however note that increased economic productivity (GDP growth forecasts for 2013 have been upgraded to 2.4%, up 0.3% on the 2.1% projected in 2012) has resulted in increased fuel prices (average USD130/barrel for the year or 33% of total airline costs) which will result in eroded dividends.
Airline cash flows are showing better than expected performance given high costs and weak growth. This however varies by region and airline size. Large Asian carriers have seen the most improvement. The trend in the US is flat but comparable with pre-recession levels, while European airlines are struggling with the lingering recession. 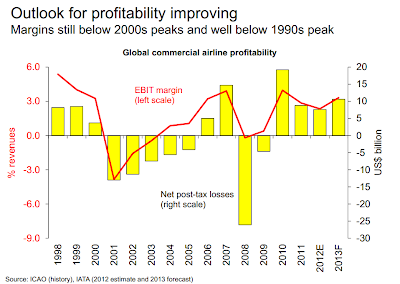 IATA’s Global Airline Profitability Projections (IATA)
Mr Tyler warned that the current Cyprus Debt Crisis is a reminder that the Eurozone Crisis has yet to pass and that things could take a turn for the worst at any moment.
On the Africa front, Mr Tyler changed the outlook of African carrier’s from stagnant to positive saying they are now expected to post a USD100 million profit in 2013. That is ahead of the break even performance previously projected and the USD100 million loss of 2012. African carriers are expected to see a 6.5% increase in demand during 2013 which they will meet with a 6.4% expansion in capacity. The continent continues to be a focal point for growth by those carriers located in the region and those providing services into the region. Competition between the two remains fierce.
It was emphasised that while aviation is a catalyst for economic growth and development that supports some 57 million jobs and USD2.2 trillion in economic activity, a profit margin of USD10billion for the global aviation industry is equitable to the profit margins of a sole conglomerate.

“The only way out of the current economic difficulties that we see around the world is growth. Airlines play an important role, providing connectivity that stimulates business and delivers products to global markets. But we can only do this if the industry is generating sustainable returns,” said Tyler. 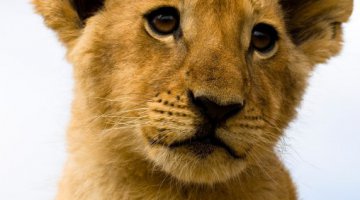