Life on the edge: Finding the fear factor at Victoria Falls 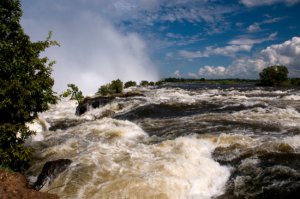 Up to ten million litres of water cascade over the falls a second (Picture: Alamy)

I’ve just discovered I’m scared of numbers. Teetering right on the brink of Victoria Falls, peering down past my toes through roaring spumes of spray, I realise I’m not afraid of heights. That’s despite the vertiginous drop of 108m, which is twice as high as Niagara.

Nor am I scared of the crocs and hippos lurking in the waters I’ve traversed to get up here. It’s when guide Felix Liyali reveals the sheer volume (and force) of the Zambezi surging over the falls and pounding the rocks below that my heart leaps into my mouth.

‘Right now, in the late rainy season, at least ten million litres of water cascade over the falls every second,’ Liyali says with a grin, enjoying the shock on our faces. Ten million? That’s more water than I can imagine – and it terrifies me. But I don’t need to imagine, I’m about to feel it. I’m in Zambia on Livingstone Island, perched right at the lip of the falls, and I’m about to go paddling.

‘In the wet season it’s too dangerous to swim in Devil’s Pool, in the middle of the flow,’ warns Liyali, ‘but if we’re careful we can dip in Baby Pool.’

Four of our party are game (or stupid) enough, so we strip down to our smalls and follow Liyali into the fast-flowing water. We wade navel-deep across a stretch maybe 5m across – though it feels much further when sudden, unexpected currents shove us towards the edge and I’m glad of Felix’s sturdy shoulder to lean on. I jump at a strange nipping sensation: tiny fish nibbling at our toes. We haul ourselves out, triumphant and shaking slightly, laughing and shouting to each other above the din of the falls – the ‘smoke that thunders’, or Mosi-oa-Tunya in local Makololo lingo.

As we dry ourselves off, I read the plaque on the David Livingstone memorial, commemorating the spot from where the great explorer admired the falls in 1855. This month celebrates the bicentenary of his birth, on March 19, 1813, and it’s one of the reasons I’m in Zambia. I’ve just spent four days paddling, first in a mokoro (traditional dugout canoe), then an inflatable kayak and, finally, a raft down the Upper Zambezi, tracing more than 110km of Livingstone’s expedition en route to the falls – and also following the gaggle of celebrities who have just done the same for Comic Relief.

The challenge, though, is far from over. This jaunt to Livingstone Island, which sits in the middle of the Zambezi, is just a breather, a little treat before those numbers prove their point. Tomorrow morning we’ll be rafting the white waters in Batoka Gorge, where the waters cascading over mighty Victoria Falls converge. When ten million litres per second squeeze into a narrow gorge and meet big, big basalt rocks below, the result is monster class IV and V rapids with names such as Oblivion, Washing Machine and Gnashing Jaws of Death.

The sun is already sizzling the back of my neck when we complete the steep climb down to Rapid 14. There are 25 numbered sets of rapids in Batoka Gorge, though at this time of year – the rainy season – the flow of the Zambezi is so powerful that Rapids 1 to 13 are too dangerous to paddle. Although I’m a little disappointed, as I recall Liyali’s head-spinning figures, I guess I can live with not tackling Commercial Suicide today.

As we head out into the serious flow of the river, I’m still feverishly repeating the words of rafting guide Sven Bolton’s safety briefing: ‘Paddle when I tell you. Get down when I tell you. And if we flip, stay with the raft.’

It doesn’t take long before my memory is tested. I’m just starting to feel my confidence rising, having bested The Washing Machine (Rapid 15), when we’re faced with a churning wall of liquid anger: Rapid 16 – The Terminator.

In a split second, I’m under, thrashing frantically and trying to work out which way is up. I break the surface, gasp for air, then I’m submerged again. After what seems like an eternity, we float out of the rapid, and haul each other back into the raft. We cough, swear and grin. I could get used to this, I think. I might even conquer my fear of numbers. 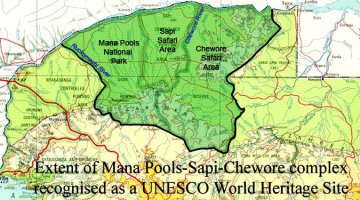