Livingstone Airport is not sinking 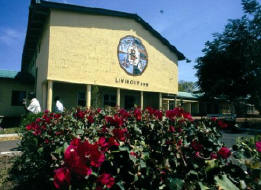 Reports in local newspapers that Livingstone Airport is slowly sinking, with cracks showing in the runway, have been taken out of context says Prince Chintimbwe, Director Airport Services National Airports Corporation Limited (NACL).
He told Tourism Update the airport was not sinking but admitted that isolated structural blemishes in the form of cracks had been identified at the airport. Chintimbwe says a programme to fix the cracks has been put in place as part of normal remedial works that are part of the airport maintenance. “Preventive measures have also been put in place to maintain the structural integrity of the facility.”
According to Chintimbwe, NACL will start the repairs of the isolated cracks in the current terminal as soon as the new international passenger terminal has been completed. Construction of the new international terminal building started in 2010 and is set to be completed by July this year.
The construction comprises a new terminal building concourse, an administration wing, a departure and arrival lounge and all core commercial areas and access roads. Upon completion of the whole project, the current terminal building will become the domestic terminal. Chintimbwe says: “The structural integrity of this new facility is not in any way in doubt and the facility will be open for use at the end of July.”
Tags: flights to zambialivingstone airportvictoria falls

Next post Zim aims to double tourism figures by 2015