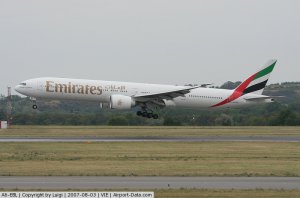 Emirates, one of the world’s fastest growing international airlines, today welcomed the introduction of a Boeing 777-300ER on its Dubai-Lusaka-Harare daily service.
Civil Aviation Authority of Zimbabwe (CAAZ) Finance Director Mr J Masuku, along with CAAZ representatives, were given a tour of the 354-seat aircraft when it touched down in Harare for the first time today.
The inaugural flight, which also coincides with the first anniversary of the launch of Emirates’ Harare service, was further marked with special Economy Class fares starting from just US$962 to Dubai, while passengers can fly from Lusaka to London from US$1,190 and Hong Kong from US$1,100. The discounted fares are on sale until February 15, for travel between February 1 and June 10, 2013.
“Introducing the Boeing 777-300ER on the Dubai-Lusaka-Harare route, just a year after we launched our service to Zambia and Zimbabwe, reflects the phenomenal growth we have seen in these markets and demonstrates Emirates’ commitment for the long haul,” said Jean Luc Grillet, Senior Vice President of Commercial Operations for Africa.
The aircraft upgrade adds more than 1,600 seats a week on Emirates’ Lusaka and Harare routes. The plane is the longest passenger aircraft ever to touch down in Lusaka, replacing the 237-seat Airbus A330-200 on the route – a capacity increase of more than 50 percent.
The Boeing 777-300ER is the backbone of the Emirates fleet, with 83 in service and a further 68 on order.
The new plane has 354 seats in a three-class configuration offering eight luxurious First Class suits, 42 seats in Business Class and generous space for  304 passengers in Economy Class, providing an additional 50 percent capacity, or 117 extra seats per flight, compared with the current Airbus A330-200 aircraft being operated on the route. The arrival of the larger aircraft will mean an increase in cargo carrying capacity of some 22 percent to more than 18,000 kgs per flight.
Throughout the aircraft, passengers will be able to experience the airline’s award-winning ice in-flight entertainment system with a choice of over 1,400 channels on-demand as well as meals prepared by gourmet chefs.  Emirates is also known for its award-winning service from its international cabin crew recruited from over 100 countries around the world.
EK 713 departs Dubai every day at 0925hrs, arriving in Lusaka at 1450hrs. The service departs Lusaka at 1620hrs, arriving in Harare at 1720hrs. The return flight leaves Harare at 1850hrs, arriving Lusaka at 1950hrs. It departs Lusaka at 2120hrs and lands in Dubai at 0650hrs the next day.
Emirates’ fleet is one of the youngest in the skies, with an average age of 77 months. The airline continuously replaces old aircraft with newer ones and has frequently been the first to sign up for new developments in aviation design and technology.
In January 2013, the world’s first purpose-built facility for the Emirates A380 was opened at Dubai International Airport, allowing faster boarding and smoother connections. From the direct boarding from the lounges for First Class and Business Class passengers, to the expanded duty free shopping, dining options from cafes to fine dining, a full service Timeless spa, two hotels and other amenities, the new concourse represents another first from Emirates in providing innovative products and services that give customers an unsurpassed travel experience.
Emirates has launched flights to a host of exciting new destinations this year; Dublin, Rio de Janeiro, Buenos Aires, Dallas Fort Worth, Seattle, Lusaka, Harare, Ho Chi Minh City, Barcelona, Lisbon, Erbil, Washington DC, Adelaide, Lyon and Phuket. Warsaw, Algiers and Haneda will also join the Emirates’ network in the coming months.
Tags: boeing 77-300Remirates airlinesflights to harare 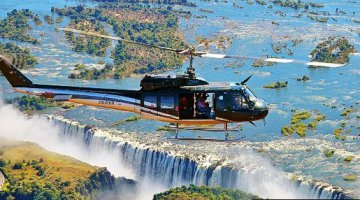 Zambezia from the Air