Comic Relief on the Zambezi River

But he admits CHAFING will be his number one enemy.

It is taking them on a journey down Africa’s Zambezi River in dugout boats, canoes and white water rafts.

The celebrities are navigating a 68-mile stretch, paddling for up to eight hours a day during the five-day ordeal that started on Monday.

After day one, Dara said: “It’s going to be really tough. So far it has been grand, but it’s the second day that you worry about because that is when you stiffen up. At one point I was at the front of the boat and I felt like a tribal leader, standing and steering.”

The stand-up said the trip was the “scariest” thing he had ever done, adding: “The bit I am worried about is the burns, bites and blisters. Chafing’s going to be the worst.”

The stars will be tackling rapids known as Gnashing Jaws Of Death, The Washing Machine and Oblivion before ending near Victoria Falls.

Dara said: “This kind of challenge takes the edge off your personality. No one is being all showbiz. We just have to get on.” 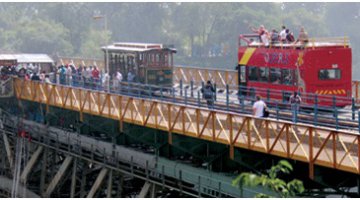