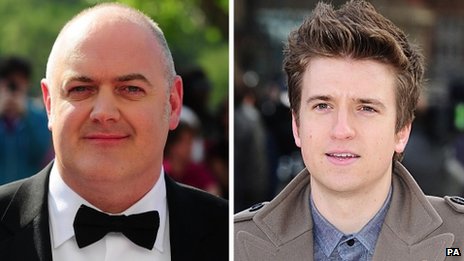 A team of stars including Radio 1 DJ Greg James and comedian Dara O’Briain is to journey down the Zambezi River in Africa to raise money for Comic Relief.

They will be paddling for up to eight hours a day during the five-day trek.

It will end at the world’s largest waterfall, Victoria Falls.

Their Red Nose Challenge, called Hell And High Water, will see them camping on cliff-tops and riverbanks.

Armed guards will also be with them to protect them from wild animals.

The journey is being staged ahead of this year’s Red Nose Day which takes place on 15 March.
‘Emotionally draining’

Mel C, who released a single for the charity with the Spice Girls in 1997, said: “It’s going to be tough.

“It’s going to be physically and emotionally demanding, but we’ve all got each other and hopefully we’ll be able to get through it.”

The group has been training at London’s Lee Valley White Water Centre, used as the canoeing venue for last summer’s Olympics.
Continue reading the main story

It’s going to be physically and emotionally demanding, but we’ve all got each other and hopefully we’ll be able to get through it

Dara O’Briain, who hosts panel show Mock the Week, said: “When I was first asked to do this challenge, I did a quick Google search of Zambezi rafting but after the 10th page of people being flung into the water I turned off the computer.

“But lives can be changed if people put their hands in their pockets in exchange for our misery so that sounds like a fair deal.”

The money raised will be used to help educate children in Zambia.

Red Nose Day celebrates its 25th anniversary this year and has raised more than £600 million for people in the UK and Africa.